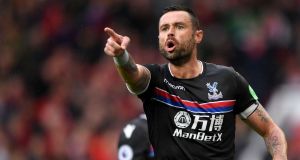 Former republic of Ireland international Damien Delaney has returned to Cork City some 18 years after he left the League of Ireland club in order to move to Leicester City.

After a couple of years there that included three loan spells away, the now 36-year-old defender moved to Hull City where he firmly established himself and most recently he had five very successful seasons at Crystal Palace before becoming quite peripheral during the season just finished.

With his contract up at the London club Delaney, who turns 37 in July, has opted to return home in order to extend his career and he will be available to manager John Caulfield at the start of July.

“I always watched from a distance to see the results on a Friday night,” he told the club’s websote. “Doing the double last year was a great achievement and I am looking forward to being part of something that is moving forward.

“Playing in Europe was part of the draw for me. It will be nice to play Champions League football! It is all part of this club moving forward and that is what I want to be here for. Hopefully there will be some good nights at Turner’s Cross for the fans and for the club in general.”

Despite his age, Delaney insists that he is in good shape and capable of making a significant contribution.

“First and foremost, I am a football player and I want to be playing football. I still have a lot left in me. Last year was the first year where I didn’t play regularly, and it wasn’t an experience I particularly enjoyed, but that’s just the way of the world. I keep myself fit, I love training and I am ready to go.”

Caulfield described the signing as “fantastic news” for City. “Damien indicated a long time ago that he would love to come back and play his last number of years with the club,” he said.

“He has so much experience to pass on to the younger lads, he is an all-round quality guy and to have him coming into our dressing room is fantastic. He is over the moon to be coming in and so are we, as we feel he will be a phenomenal addition to the club.”