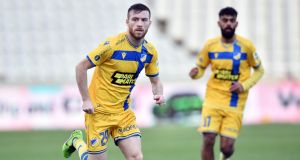 Warm weather training may be out for Jack Byrne just now but warm weather everything else is very much on the agenda as the Apoel midfielder begins his recovery from the back surgery he underwent last week.

“I’m really enjoying it, it’s different,” says the Dubliner as he announces that it is “only 20 degrees,” through a big grin. “I’m still getting used to it . . . waking up in the morning in shorts and a t-shirt rather than a big jacket and hat.”

From a distance, it’s clear that the transfer has not gone entirely to plan with Mick McCarthy having been sacked soon after signing him and an underlying back problem flaring up just as he sought to settle into the team. But Byrne gives every impression of being happy nevertheless, viewing the move as a longer term thing that he is still confident will come good when the summer is done and the club gets to put what has so far been a deeply disappointing campaign behind it.

“It was the biggest chance that came up, the one that stood out to me, where I could grow as a person, learn,” he says as he reflects on a decision making process in which McCarthy’s presence was, he insists, only one of many factors.

“I was going to work under a manager who knew me, knew my strengths,” he acknowledges, “not for too long, as everyone knows, but the rest of it . . . the thinking in coming out here was for me to learn a new way of life, a new culture.

“I am going to play with players who I’d never get the chance to play with, a lot of Spanish and Portuguese players, Greek players, we have four Brazilians in the squad, you are playing a different style of football. I want to coach one day and I want to see how teams in other countries do things, the way they approach it. It is going to be a great learning experience.”

The Irishman is out of this month’s international games and uncertain about the friendlies in June, initially suggesting that he could well be fine but then sounding less certain. His enthusiasm for the club and the possibilities it offers is unclouded by doubt, though.

Having spent the early part of his career hearing people debate whether, in effect, a team can afford to have Jack Byrne in it, he says the attitude in Cyprus is “try to get as many Jack Byrnes in as you can. It’s technical football, they want to play, get the ball down and play. Maybe that’s why they wanted to make the change with Mick, they want to play and knock the ball around; they take risks.

“That’s not to say that Mick doesn’t play,” he adds quickly. “He does. He managed his 1,000th game the other night but here it’s different.”

He is, he makes a point of mentioning, grateful to Shamrock Rovers for the platform it provided but Apoel’s recent record suggests it has the potential to put him on a bigger stage with the Cypriots having featured more often than not in one of the European club competitions’ group stages over the past few years.

Just short of a decade ago, they topped their Champions League group but after a disastrous start to their domestic campaign this season they now need to win the Cypriot Cup to qualify for Europe at all. That hope could well be killed off by far more in-form rivals Omonia when the two sides meet on Wednesday with their quarter-final tie standing at 1-1 after the first leg.

Failure to get through could compound the financial challenges faced by a club with a history of budgeting for a rather greater measure of success but Byrne is unfazed, believing the squad is good enough to bounce back and start to deliver on expectations again next season whatever happens in the coming days and weeks.

It is likely to be next season anyway by the time he gets the opportunity to further advance his own case for more than a bit part on the international stage but Stephen Kenny, he says, has been relentlessly supportive, encouraging the 24-year-old at every turn and keeping in regular contact, most recently when it emerged that his herniated disc required surgery.

The midfielder is clearly intent on repaying the faith, but right now, there is little option but to relax and take it easy. It will be hot out there soon enough.

*Jack Byrne was speaking to promote the Spar/FAI School Zone, a new digital learning initiative designed for teachers and parents of primary school children in 4th, 5th and 6th class and intended to offer interactive and engaging lesson plans.