Tim Sherwood: I don’t know who Jack Grealish will choose 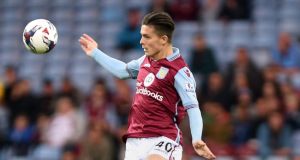 Jack Grealish will pledge his international future to England rather than Ireland, according to reports. Photograph: PA

When asked if the 20-year-old had confided in his boss over who he will choose to play for Sherwood said: “No he hasn’t told me, no. I really can’t make his decision. He needs to... in his heart of hearts where is he? Is he English, is he Irish? And he’s got to make a decision based on what his heart tell him.

“I had a similar situation with Nabil Bentaleb who had an opportunity to play for France or Algeria, and when I spoke to him he just said my blood’s Algerian, I feel Algerian so I’m going to play for them. That’s how he made his deicison, perhaps Jack will feel the same.”

This follows reports earlier on Thursday that Grealish was set to choose England rather than Ireland ahead of next month’s final round of Euro 2016 qualifiers.

Grealish, who turns 20 on Thursday, has represented Ireland from U-17 to U-21 level but is thought to be ready to commit his senior career to England, dealing a massive blow to Ireland boss Martin O’Neill.

O’Neill was believed to be hoping to include Grealish in his squad for the vital upcoming games against Germany and Poland which will decide Ireland’s European Championships qualification fate.

However Grealish, who is currently injured, is hopeful of forcing his way into Roy Hodgson’s plans for France next summer, despite the England boss suggesting he is unlikely to select any players who haven’t already featured in a successful qualificaiton campaign.

England have qualified from Group E having won all eight of their games so far, and Grealish will opt for England in time for their final two fixtures against Estonia and Lithuania.

Earlier this week O’Neill had accused Hodgson of putting pressure on Grealish to make a decision over his international future.

Following England’s 6-0 win over San Marino last Saturday Hodgson confirmed he had been in touch with Grealish to try and persuade him to opt for the country of his birth.

Hodgsson said: “We’ve spoken to him and what we’ve said, quite simply, is that we think he is a very talented footballer.

“We think he could have a very good international career and we would be more than happy if he chose that career to be England. I’m still hoping that’s what he will do but at the same time because of his family [GRANDPARENTS]he has the opportunity to play for Ireland.”

That led O’Neill to suggest Hodgson was pressuring the 20-year-old into rushing into a decision. When asked about the England manager’s comments O’Neill said: “That’s encouraging, that’s encouraging. Roy’s not going to hang around. Well done Roy, putting the pressure on.”

1 Charlesland Golf Club set to close permanently in December
2 Dortmund say Man United must pay more than €120m for Sancho
3 The Offload: Springbok heavyweights heading for Pro14
4 Gerry Thornley: South African sides would be a welcome addition to Pro14
5 South African franchises could join Pro16 by next March
Real news has value SUBSCRIBE
Crossword Get access to over 6,000 interactive crosswords