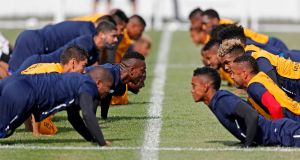 The Panama players train at the Olympic Park Arena in Sochi on Sunday. Photograph: EPA

Excitement levels may have reached Ireland Euro 88 levels in Panama last October after the central Americans clinched an unlikely place at their first World Cup, but their Colombian coach is working hard here to ensure he and his team don’t now become victims of soaring expectations too.

Colombian Hernan Dario Gomez has been here before, twice in fact, having led his own country to France in 1998 then Ecuador to Japan and South Korea four years later. Neither team progressed beyond the group stage, a far greater disappointment to his own country’s fans, but he has never gone home entirely empty-handed and Ecuador effectively put Croatia out when they managed a surprise win over the Europeans in Yokohama.

Most of the time, though, his sides are simply tricky to beat and if Panama are even that here in Russia then it will perhaps be his greatest achievement yet. They kick off on Monday here in Sochi against a Belgium side that, unsurprisingly, Gomez lists one of his favourites for the title.

Asked if his players can take some inspiration from Iceland’s results against Argentina, the 62-year-old suggested that the comparison didn’t really come close to capturing the scale of the upset that would be required. “Argentina are not up there in terms of quality with Belgium,” he claimed. “And Iceland had a good Euros, there is not much distance between them and Argentina, whereas there is a very great distance between Belgium and us.”

There was a touch of the Trapattonis with Ireland about it all with the coach naming his team, openly discussing the tactics he will employ and observing that “if we have a good day tomorrow then maybe we can get a good result,” when pressed by a Panamanian journalist to say something a little more upbeat than his initial, even gloomier assessment of his side’s prospects.

They do not, to be fair though, look all that great. The Panamanians have become decent sized fish in the very small pond of central American football over the past decade or so but would almost certainly not be here had the United States not had a prolonged meltdown in the final round of qualifying.

Panama lost 4-0 in the US but a rare goal by then 32-year-old defensive midfielder Gabriel Gomez prevented the visitors taking all three points in Panama City which kept them in them hunt until the final set of fixtures. Gomez and co needed to beat Costa Rica, who were already through, and hope, far more implausibly, that the Bruce Arena’s side lost in Trinidad and Tobago. But that’s the way it panned out although Panama’s winning goal didn’t arrive until the 88th minute when then Roman Torres popped up to make it 2-1 to the hosts and kick off a bit of a party.

The goalscorers are now 34 and 33 respectively; half of the team is, in fact, the wrong side of 30 and their lone striker is 37. It all suggests a handy enough night’s work for the likes of Jan Vertonghen (a sprightly 31) and Dedryck Boyata.

Posing an attacking threat, their coach acknowledges, is an issue for this Panama team and, he admits, “we lack the touch required to put the ball in the opponents’ net,” but he is more confident in the team’s organisation and defensive work ethic.

“We’re not making it up,” he says. “We are not improvising. Every man is at his post. We have worked very hard at performing the roles.”

Now, he insists, it is about mastering the mentality required to get the very best out of themselves against manifestly better sides. “We have to have a hot body but a cool mind,” he says. “The most important thing is to go back to Panama with our heads held high; proud of the work that we have done here.”

His Colombia side beat Tunisia in 1998 and a repeat of that along with narrow defeats by the group’s top two would allow them to head home to a good reception. Anything more requires something of a miracle but then they were saying the same thing about getting here last October.

1 Tipping Point: DeChambeau’s transformation raises questions, but who will ask them?
2 Pete Sampras: The forgotten great with the best serve in the business
3 Super Rugby AU offers glimpse of rugby’s future if law changes are adopted
4 Cam Newton broke the mould: Can his flame be rekindled at the Patriots?
5 Mental clarity in chaos: Novak Djokovic, the man who turned two into three
Real news has value SUBSCRIBE
Crossword Get access to over 6,000 interactive crosswords