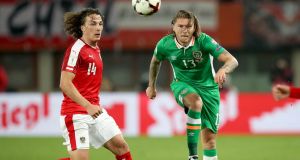 Ireland’s Jeff Hendrick has developed into a key player in Martin O’Neill’s squad and has been helped by his move to Burnley. Photo: Inpho

There was a hint of agitation to Martin O’Neill’s tone a couple of months back as he made it clear that he does not feel there is anyone out there who would be a better bet than him to get Ireland successfully through this World Cup qualifying campaign. Not for the first time O’Neill sounded as though he felt his achievements were being a little under-appreciated. After Austria he might be hard pressed to find any offenders.

Saturday’s win took Ireland two points clear at the top of their Group D and that has put them in some good company. Germany, Spain and Belgium are amongst the other sides currently occupying the automatic qualification spots and though all three will be more confident of ultimately playing in Russia, O’Neill will feel he can capitalise on an opportunity he has done so much to engineer.

The former Sunderland manager has not transformed the way Ireland play nor made the players world-beaters. The team are still uncertain in possession and the number of errors they make suggest they will still be susceptible to being well beaten by a very good side. This year, though, that really only happened once, against Belgium.

France beat them too, and may have done so anyway, but it is hard not to take some account of extra rest days the Euro 2016 hosts had and wonder, as O’Neill has, just what might have been had Ireland not drawn the short straw.

Certainly the team seems to have drawn strength from their involvement in the European Championships. It is a far cry from four years ago when they were deflated by their experience in Poland and struggled to pick themselves up again under a manager whose lack of faith started to prove self-fulfilling.

O’Neill has placed huge trust in the likes of Robbie Brady, Jeff Hendrick and, most obviously just now, James McClean, and has been generously repaid. There are some decent individual players but the team is encouraged to be positive and to play to its strengths.

And this encouragement, it seems, has a restored sense of passion. Without that passion, they may have taken one point from the games in Belgrade and Vienna, never mind four.

The manager, it should be noted, has been fortunate in some respects. Against Italy, the game that turned Ireland’s summer into a success, the win came against a weakened team with nothing to play for, while the both games against Serbia and Austria seemed to come at opportune times.

His achievement at this stage is pretty much beyond dispute, though. Under O’Neill the line-up has evolved, the pattern of play has improved and the confidence has soared.

In all but one of 13 games this year, the team has scored at least once and even when, as on Saturday, they are obliged to dig in with a lot of bodies behind the ball for prolonged periods, there is a distinct sense that they still envisage themselves getting a goal somehow themselves.

McClean’s sudden emergence as a potent goal threat comes just a matter of months after O’Neill bumped him up from sub to regular starter status. And though Ciaran Clark and Shane Duffy have some way to go as an international partnership at the other end, Ireland are currently winning while they improve.

Seamus Coleman did not, in truth, seem like the most obvious candidate to take over the captaincy but he looks to be embracing the responsibility while playing some of his best football for a couple of seasons. Darren Randolph continues to do well despite not play for West Ham . . . the list goes on.

For all of that, the fundamentals have not changed substantially with only half of the 14 players to feature on Saturday night, for instance, getting regular football at top-flight clubs; and the future does not necessarily look all that bright.

O’Neill has used 38 players this year, 26 of them in competitive games, but his team is essentially a fairly settled one, in part because he has few genuinely strong options.

He has handled the departure of a few old hands well so far but cannot even be sure that Glenn Whelan, Jon Walters and Wes Hoolahan, all crucially important this year, will continue to perform at their current levels until the end of the qualification campaign.

The return of Rob Elliot, Alan Judge, Marc Wilson and even Darron Gibson will help, while Harry Arter has the potential to become a central figure.

But there is nothing like the required number of young players coming through to maintain, much less improve, the squad and the lack of a natural striker remains a huge concern. The job will not get any easier, in other words.

O’Neill, one suspects, quite fancies himself to get by regardless.