Colin Bell’s side were outclassed by Norway at Tallaght Stadium 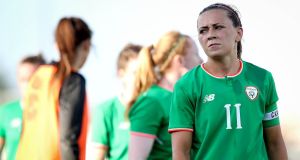 The celebrated progress of Ireland’s women’s team was put into stark perspective in this World Cup qualifier as Norway won the first of two encounters between the sides in four days rather easily and, in the process, leapfrogged their hosts to go second in the Group C table.

A win in Stavanger on Tuesday would revive Ireland’s fading hopes of a playoff place but it will require some turnaround after this.

“It’s a learning curve,” said manager Ireland’s Colin Bell who made no secret of his frustration at the way the two goals that decided it were conceded immediately afterwards. “Sometimes you have to have a smack in the face or even a couple to learn but we have to learn fast and stop making these mistakes.

“Norway are the better side but you cannot concede those sorts of goals and expect then to stay in the game; you cannot make those mistakes against this quality of team.”

Both goals were certainly softly conceded. From Guro Reiten’s corner 21 minutes in, Lisa-Marie Utland was allowed to head goalwards and Marie Hourihan couldn’t quite react quickly enough to make the save.

The second, though, just over an hour in, was worse with Caroline Graham Hansen’s angled free flicked on by Ingrid Syrstad Engen before Aine O’Gorman turned the ball across the six yard box and Utland popped up unchallenged at the far post to drive home from a few metres out.

“There wasn’t miles between us,” insisted Bell, however. “It was just in those decisive moments that there was a difference of class. But this is world class football, they are learning, playing against world class players, which some of those Norwegians are. But we have a long way to go.”

The manager suggested that he had been about to add a second striker just as the Norwegians got the goal that put the result beyond doubt but Leanne Kiernan could, perhaps, have done with a little help before then. As her team mates spent most of their time defending deep behind her, the 18-year-old ran herself into the ground chasing between opponents with little to show for her efforts although she threatened at one point to score what would have been a truly remarkable goal.

Hourihan, whose general hesitancy was again a concern, saved well from Frida Maanum and from the resulting corner Kiernan took off, brilliantly beating two defenders before appearing to run out of steam. She was clean through by then but her eventual shot lacked power, something that allowed Ingrid Hjelmseth to fairly comfortably complete her one and only real stop of the match.

“Leanne’s got to finish,” remarked Bell, “not with a low shot; she’s got to whack it like she did against Slovakia.”

An equaliser so early in the second half might well have changed the wider course of the game but as it was Norway always looked well on top of things. It was more competitive, for the most part than against the Netherlands in April and the likes of Denise O’Sullivan and Tyler Toland did well for the most part but before having to deal with a late bit of pressure, the visitors might well have had a another goal or two, most obviously when Reiten, one of their standout players, fired off the post with a shot taken under pressure.

By then, Louise Quinn had long since departed with a broken nose sustained while making a block and the Arsenal defender is a doubt for the game next week.

“We have to win on Tuesday,” said O’Sullivan. “There is no doubt about it. So we’ll go out and attack them. We’ll still stay disciplined and we’ll still stay compact and try to beat them on the counter.

“We will analyse it tonight with Colin and the staff and after that we’ll let go of it. We’ll obviously look at our mistakes and we’ll do better with our shape, be more compact and tighten up those spaces. We just have to concentrate on Tuesday.”