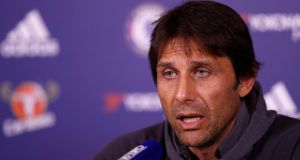 Chelsea manager Antonio Conte during a press conference on Monday. “We want it to become a great season, a fantastic season.” Photograph: Reuters/John Sibley

Antonio Conte would consider winning the Premier League title this season with Chelsea as the greatest achievement of his managerial career to date, with the feat carrying greater weight in the context of the lavish sums spent by both Manchester clubs last summer.

While City and United prepare for a derby at the Etihad Stadium on Thursday with Champions League qualification their priority, Chelsea can move seven points clear at the top of the Premier League with victory against Southampton on Tuesday night at Stamford Bridge.

Re-establishing that imposing lead would potentially inflict further psychological damage on second-placed Tottenham Hotspur, whom they beat in the FA Cup semi-final at the weekend.

“For sure, it would be my greatest achievement,” said Conte, who claimed three Serie A titles with Juventus and took Italy to the Euro 2016 quarter-finals. “Now, to win the title in England is a great achievement. A top achievement for the coach, the players and the club.

Conte had inherited a side who had finished 10th last term, their worst placing under Roman Abramovich’s ownership, with that actually representative of a recovery under the interim stewardship of Guus Hiddink after the unravelling of José Mourinho’s second spell in charge over the first half of the campaign.

The Italian added David Luiz, N’Golo Kante – whom Conte described as “a silent leader” in the dressing room – Marcos Alonso and the under-used Michy Batshuayi to the ranks for around £100 million (€117.8m) over the summer, a significant outlay eclipsed by the £150 million (€176.7m) spent by United and £165 million (€194.3m) by City in the transfer window.

“This season it’s very important to understand it’s not always about who spends more money who wins,” said Conte, who should have his captain, Gary Cahill, fit after illness and will recall Diego Costa and Eden Hazard against Southampton.

“Otherwise, in this league, this season the name of the [title-winning] team wouldn’t be Chelsea or Tottenham or Arsenal or Liverpool. You understand?”

Asked if he anticipated the Manchester clubs spending as excessively again over the summer ahead, he said: “Yes, like every year. You’ve seen the past. You can see that every season they spend a lot of money. But it’s right for every team to do what they think is best.

“Every single club decides their own strategy. But this season isn’t the only season the Manchester clubs have spent a lot of money. Look at the past. It’s normal. It’s right for them to do this, to reinforce their teams, if they think this is the right way to win the title.”

The Italian has already discussed Chelsea’s plans for the summer with director Marina Granovskaia and technical director Michael Emenalo, with the leaders hoping to strengthen significantly themselves ahead of their return to the Champions League next term. The likes of Alexis Sánchez, Romelu Lukaku, Virgil van Dijk, Tiemoue Bakayoko, Alvaro Morata and Alex Sandro feature on a hefty wish-list.

“In every situation it’s important to find the right balance: If you have to spend money, try and spend that money in the right way to take players with the right characteristics for your idea of football,” Conte said.

“But, for us, I repeat: this season is very important because we are trying to build something important for the present, to put the foundations down and be strong, stronger for the future. And to build, also, slowly slowly to become a real power. A real power in the future.”