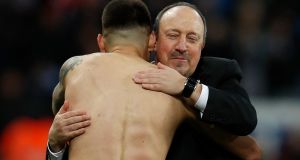 As the final whistle blew the Tyneside air felt Arctic but Rafael Benítez bore the look of a man feeling the warmth of the sun on his back for the first time following a long, hard winter.

A year after enduring the ignominy of relegation, Newcastle United’s manager had returned his team to the Premier League and, at a stroke, the sometimes untidy travails of a tough recent few weeks on the Championship treadmill melted away.

Fittingly automatic promotion was ultimately secured thanks to a stylish second-half dismantling of a Preston North End side disappointed to have missed out on the play-offs but, rather like Newcastle’s season, the evening was not entirely straightforward.

By the seventh minute Newcastle had reached passport control at the Championship/Premier League border and seemed set to be waved through. Ahead courtesy of a goal stabbed in by Ayoze Pérez – who may or not have used an arm to help control a flick-on from Matt Ritchie’s corner – they briefly looked capable or reprising October’s 6-0 League Cup victory against Simon Grayson’s side here.

When Preston had no answer to Vurnon Anita’s right-wing advance and perfectly weighted cross to Aleksandar Mitrovic, whose deflected shot prefaced that Ritchie corner, the Gallowgate End briefly sensed another thrashing in the unseasonably chilly April air.

Such instincts swiftly proved untrustworthy when Preston’s Daniel Johnson found himself clean through and one-on-one with Rob Elliot. It was the goalkeeper’s first league game since March 2016 and came after months spent recovering from a ruptured cruciate ligament and then understudying Karl Darlow but, unexpectedly, and controversially, Benítez had dropped Darlow to the bench.

Happily for Elliot he passed that initial test comfortably, repelling the shot competently before Paul Huntington headed over the bar from the subsequent corner. As good a goalkeeper as Elliot is it was arguably a piece of high-risk rotation in such a significant game and Benítez looked suitably vindicated.

Undaunted, Preston soon succeeded in wiping the smile off his face. Jordan Hugill had been causing Jamaal Lascelles and Ciaran Clark quite a few problems and, when he exchanged passes with Tom Barkhuizen before equalising by flicking the latter’s left wing cross beyond Elliot’s reach, they felt the full force of their manager’s disapproving stare.

The temperature had dropped to the point where not wearing gloves seemed a major tactical error and it was easy to believe the impending forecast of a dip to freezing point followed by light snow in the early hours. Wearing a thin, spring-time, suit jacket, Benítez looked thoroughly underdressed but was sufficiently hot and bothered by his side’s struggles to seem impervious to the chill.

With Hugill a real handful, Preston persistently threatened on the counterattack while also succeeding in stifling Jonjo Shelvey’s room for creative manoeuvre. If Newcastle were encouraged by Chris Maxwell’s apparent shakiness – and enthusiasm for punching rather than catching – in the visiting goal Grayson’s players were defending in depth before breaking with guile and alacrity.

As half-time approached the stadium had fallen strangely silent as home fans reflected on how the hamstring problems latterly suffered by their sidelined leading scorer, Dwight Gayle, have left the Tynesiders limping towards the Premier League.

Then, suddenly, Benítez’s players reminded everyone they can all play a bit too and burned off Preston courtesy of a startling change of collective pace. It began with Aiden McGeady and Johnson getting their wires crossed in midfield, enabling Isaac Hayden to pinch possession.

Cue a sweeping attacking move featuring Hayden playing in Mitrovic who, sensibly, passed across the box for the onrushing Chelsea loanee Christian Atsu to direct an assured left-foot shot past Maxwell.

Pérez very nearly scored again at the outset of the second half in the wake of Paul Gallagher’s slapdash concession of possession but, this time, Maxwell saved well and Benítez continued to appear on edge.

As Barkhuizen sped down the left, outstripping every marker, the Spaniard’s unease seemed fully justified but the midfielder’s eventual cross proved marginally too strong for the advancing Hugill and Newcastle remained in front.

Heeding this warning the Tynesiders upped the tempo and forced a series of corners. Such set-pieces left Maxwell in particular looking increasingly rocky and, finally, led to a commendably poised Ritchie scoring left-footed from the penalty spot after Gallagher handled on the line.

Pérez registered Newcastle’s fourth with no one caring that he probably did not know too much about how Shelvey’s corner ended up going in off his body from close range after rebounding off a post.

It was almost time to start the party, almost time for Benítez to carefully put his spectacles in his suit pocket, embrace this staff and with a specially-adapted version of La Bamba blaring from the sound system walk, smiling, towards the centre circle.

“Rafa Benítez, Rafa Benítez,” roared St James’ Park as the manager indulged in a low-key lap of honour with his players before heading for the Gallowgate End arms aloft. Mike Ashley, Newcastle’s owner, had better keep him happy this summer.