Jonathan Walters, Daryl Murphy and Kevin Doyle are all ruled out of the Slovakia game 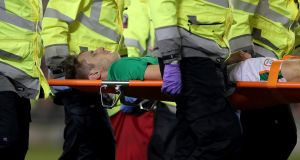 Republic of Ireland forward Kevin Doyle leaves the pitch on a stretcher during the friendly international at the Aviva Stadium. Photograph: Donall Farmer/Inpho

Republic of Ireland manager Martin O’Neill has seen his forward options further reduced for Tuesday’s friendly international against Slovakia after it was confirmed on Saturday night that Jonathan Walters, Daryl Murphy and Kevin Doyle will all miss the game at the Aviva Stadium.

Doyle was carried off the pitch on a stretcher in Friday night’s 1-0 win over Switzerland with a deep cut to an ankle. The Colorado Rapids player required plastic surgery at the Mater Hospital and is expected to be out for up to a month.

Ipswich striker Murphy replaced Doyle after 27 minutes of the Swiss game but also picked up a knock and has returned to his club for further medical treatment.

Walters will not be risked against Slovakia after picking up a knock during training last week and he has returned to Stoke.

With O’Neill having ruled out Robbie Keane from both games, he is left with just Shane Long from the original forwards named for the two games.

thanks to the plastic surgeons at the mater hospital,leg looks brand new,no serious damage,back jogging in a few weeks.👍for all the messages

O’Neill may call up a striker, with Anthony Pilkington an option as he has been playing up front with Cardiff City. He could also give Alan Judge a chance in his preferred position playing off a striker or possibly push Johnny Hayes into a more forward role.

Meanwhile, Doyle will remain with the Ireland squad for ongoing medical management following surgery on his shin injury.

Doyle earlier confirmed he suffered no lasting damage after going down in agony following a challenge by Norwich defender Timm Klose.

Doyle later tweeted a graphic photograph of the injury as he prepared to undergo a procedure to clean and stitch the wound at the Mater Hospital.

But on Saturday morning he revealed he will be able to resume start running once again within a matter of weeks.

Doyle tweeted: “Thanks to the plastic surgeons at the Mater Hospital, leg looks brand new, no serious damage, back jogging in a few weeks.”

The injury could hardly have come at a worse time for former Cork City striker, who was starting his first game for Ireland since a 2-0 friendly victory over Oman in September 2014.

He now has 62 caps and has scored 14 goals for his country, but will miss Tuesday night’s friendly against Slovakia and another chance to stake a claim for a place in O’Neill’s squad for the Euro 2016 finals.