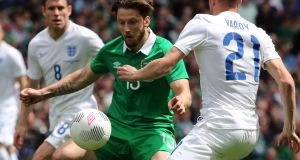 Harry Arter in action in the internatonal friendly against England’s Jamie Vardy at the Aviva Stadium in June 2015. Photograph: Paul Faith/AFP/Getty Images

A week ago everybody, it seems, was laughing at Jeff Stelling and Paul Merson wondering aloud on Sky Sports what possible reason there could be for Harry Arter not getting an England call-up after the way he has been playing for Bournemouth. The fact that he had played two games for Ireland never seemed to enter into things for the pair and much scorn was piled upon them.

I was a latecomer to it all but when I heard about it, on the radio, I laughed along with the best of them; something that was playing on my mind as I found myself, an hour after Thursday’s game against Georgia, with a group of newspaper journalists as Martin O’Neill was being asked question after question about whether Arter might, in fact, be about to defect.

The Ireland manager had been asked moments before, in the main post-match press conference, about “rumours that were going around England” that the 26-year-old midfielder was indeed about to make himself available for selection by England.

This was news to me and O’Neill simply said that he was unaware of the rumours but that, having not been capped in a competitive game, such a switch remained an option for Arter.

When pressed on it subsequently by the smaller group he could add little, as he clearly knew nothing, but said that he would get on to the player to check whether there was anything to the story (which he apparently did yesterday to be told there was not).

After he left, a discussion broke out as to whether we had really just devoted the bulk of the limited time with the manager asking him questions based on nothing more than a Twitter rumour.

This is scarcely a first. Only a couple of weeks ago a lot of ostensibly credible news organisations in France and England (and many other places too, presumably) ran a story about Emmanuel Adebayor having supposedly smoked and asked for, among other things, whiskey in his coffee as he discussed a move to Lyon with the club’s coach.

The story originated with a spoof website and a couple of days later just about everybody was running with the player “dismissing” the story, some of them passing casually over the fact that they had run the original yarn without realising it was a joke.

That was an extreme example but a growing part of modern-day journalism has to do with deciding when not to go with a story doing the rounds on social media.

Some fairly unforgivable mistakes are made – L’Equipe, for instance, once went it a story that had been run by a website called thespoof.com about Robbie Fowler having been once arrested for possession of quite a lot of cocaine – but it is not always such a straightforward matter.

Oddly, the Arter story becomes a little more complicated with hindsight. During calls made in connection with this article, it was suggested that doubts had been expressed within the Ireland set-up about the player’s commitment – it really was as tenuous as that but even that would have been enough, perhaps, to justify questioning O’Neill on the issue.

This might indeed be the basis on which it was asked but it is certainly not the way the question was framed, and so O’Neill believed, as did all of the other reporters, that he was being questioned about Arter’s intentions on the basis of nothing more than rumour.

Rather, all the available evidence points to Arter having quietly, and with some dignity, accepted a number of injury setbacks and disappointments as he waits to make his competitive debut.

It is not clear on this occasion whether the Irish management team felt he might, at a stretch, have pushed himself so as to be available to play despite an injury that scans suggested was not that serious, but both O’Neill and Roy Keane said publicly that they believed it was his prerogative to withdraw from the squad if he did not feel right.

Only last week, in any case, Arter told his club’s local paper, the Bournemouth Echo: “It [Ireland] is a tough team to get into. James McCarthy wasn’t there last time around [Ireland’s opening qualifier in Serbia] and I didn’t get any minutes then. So, hopefully, this time around, if am fit, I will get a few more minutes. It’s an honour to represent your country. I always look forward to it, whether it’s a friendly or a qualifier.”

That would have been quite a quote if he had really intended to effectively change his country five days later.