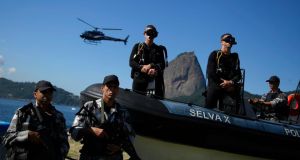 Some of the military police officers responsible for security at the World Cup pose for photographs in Rio de Janeiro last month. Photograph: Pilar Olivares/Reuters)

Anti-World Cup protests are not the only problem Brazilian security authorities will face during the tournament. They are also bracing for an invasion of Argentine football hooligans.

The fan clubs called “barras bravas” in neighboring Argentina are notoriously violent and Brazilian police are taking no chances.

Brazil plans to beef up security in and outside stadiums where Argentina will play, deploy undercover cops and bring in Argentine police officers to spot troublemakers, police officials in some host cities said.

“I don’t care what they call these people. Brazilian police, in cooperation with foreign police, will be tough in responding to anyone who comes here to commit crimes,” said Andrei Rodrigues, Brazil’s security chief for the World Cup.

More than 50,000 Argentine fans are expected to come to Brazil for the World Cup.

The barras bravas have a history of violence, from stabbing English fans in Mexico in 1986 to fighting each other during the last tournament in South Africa four years ago.

Like fans from all over the world, many Argentines were unable to secure tickets to games and will be milling around outside the stadiums. That could spell trouble if the barras bravas run into local fan groups, or “torcidas,” which are blamed for growing violence plaguing Brazilian soccer.

“There will be a lot of torcida youths angry that expensive tickets left them outside the stadiums. If they encounter Argentine barras bravas you could easily have clashes,” said Rafael Alcadipani, a professor at the Getulio Vargas Foundation who has studied the protests around the World Cup.

“It is a very dangerous mix. The risk of violence is imminent at this World Cup.”

Like Argentina’s barras bravas, some of Brazil’s torcidas are believed to be linked to organized crime that uses them to distribute drugs and arms in slums of large cities such as Sao Paulo and Buenos Aires.

Brazil hopes to stop barras bravas at the border using a list with more than 2,000 names of violent hooligans provided by the Argentine government. That will be the first line of defence against violent fans, Rodrigues explained at the brand new national control center with wall-to-wall screens linked to cameras in all 12 host cities.

Brazil also plans to deploy 157,000 police and troops to secure borders and maintain order around stadiums.