The end of a rule that barred women from wearing a hijab while playing football has seen the numbers of young muslim women taking up the game rise. Video: Daniel O'Connor 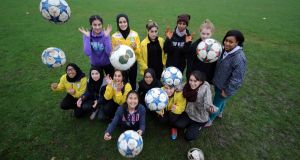 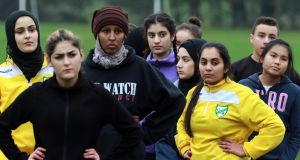 Hijabs and Hat-tricks: ready to line out. Photograph: Nick Bradshaw

Growing up in Tallaght, Fadhila Hajji loved playing football with her brothers.

Kicking a ball around the yard during her teen years was the perfect way to relax after a long day at school. Unfortunately, the headscarf or hijab she wore as a Muslim teenager meant she was unable to play matches with other girls.

“It was very upsetting to me because I couldn’t express my passion for football,” says Hajji as she prepares for her weekly training in Phoenix Park on a grey, wet morning. “It was something I really enjoyed playing, something that I could use to blow steam off. Playing with everyone was just my happy time. I was really eager to join a team but couldn’t because of my headscarf.”

In March 2014, football’s world-governing body Fifa lifted the ban on head covers during matches. This meant female Muslim players would have the option to cover their heads when playing.

When Hajji’s brother Abdul-Rahman heard about Fifa’s decision to lift the ban on headscarves, he approached his sister with the idea of creating a Muslim women’s football team in Dublin. He was already an active member of Sports Against Racism Ireland (Sari).

Along with their friend, Abdul, the three young soccer enthusiasts contacted friends around Dublin encouraging them to get involved in their “Hijabs and Hat-tricks” project. Diverse City FC kicked off training in March 2014 and, two months later, they made their debut at the Fair Play Cup on World Refugee Day.

Ayub was already a keen footballer player when Hajji called her in 2014 to join the new team. Before playing with Diverse City, she often removed her scarf for fear of sticking out on a pitch of non-Muslim players.

“It was more I was uncomfortable in my own skin,” says the 17 year old, catching her breath after warm-up laps. “Knowing you’re the only Muslim, you try and fit in more with the other girls, so I took my scarf off.”

The decision to join Diverse City has given her the confidence to play her favourite sport while wearing her hijab.

“Since I’ve joined this team, I’ve been wearing it to my school matches, to clubs and everything. The team gave me more confidence to go out there . . . to wear my scarf, to be proud of being a Muslim. To be proud of my scarf because it’s part of my identity.”

Wearing a scarf while playing sport is just like tying your hair back, says Ayub. “It’s also great because when it’s windy or raining you have an extra layer so your hair doesn’t get wet.”

Amina Moustafa, who is in first-year science at Trinity College, doesn’t wear a hijab, but has many friends who were afraid to join teams because of their headscarves. She and her twin sister, who also plays on the team, were lucky enough to grow up in a household where sports was always encouraged.

“My mam said when she was younger she was told not to play, that maybe it wasn’t for her. She didn’t want that for us so she encouraged us to keep going out.

“She loved the idea that there was a Muslim girls team and it was promoting diversity and interculturalism in Ireland. I’ve done so much sport over the years and this is the best team for bonding together. Normally, you just play the sport and go home, whereas I feel when we’re playing there’s more of a connection between the players.”

The girls are so enthusiastic about Diverse City they insisted on continuing training and playing matches during Ramadan – a period of the Islamic year when Muslims do not eat or drink anything between sunrise and sunset.

“It’s a good distraction from eating,” says Moustafa. “You don’t even think about it. We were just thinking about how amazing it was that we actually won a match when we didn’t have any energy.”

Azeez Yusuff, who coaches the team, says he was pleasantly surprised by how talented some players are. “All of them were good from day one when I first saw them – and now they’ve just totally developed which is absolutely amazing.”

“It’s great to see everyone mixing together because people say Muslim women just stay at home and stuff like that. Here you can see they’ve proven them wrong.”

“Why should they have that restriction when in their culture they have to wear something to cover their hair?” he asks. Kerr believes Ireland’s decision to host the 2003 Special Olympics marked a turning point in attitudes.

“Why aren’t we inclusive in sport for everybody? As long as people give it the best they can and we can provide those opportunities, it can be vastly satisfying for players, coaches and volunteers.”

“A new population is coming into the country; a new diverse group with different religions and different cultural norms.”

Fadhila Hajji is proud to have played a leading role in making competitive football a reality for Irish Muslim women in their teens and early 20s. In December, she received a People of the Year Award for her work with Sari in fighting discrimination through sport.

“I feel proud. I feel like I have achieved something for the team, for myself and also for people around the world that feel inspired. I think it’s great that people from different backgrounds and ethnicities are getting together in one community and playing football.”

Hajji believes Muslim participation in sport sends out a positive message. “Islam is not portrayed very well at the moment. People seeing the Muslim people doing something good, that’s what we need right now.”

1 Wales cry foul over Furlong’s scrum technique
2 Ireland to stick with winning formula against England
3 Gerry Thornley: England primed to show their best against Ireland
4 Mourinho expects Son to miss rest of the season
5 Man City’s Abu Dhabi owners not the sort to back down over ban
Real news has value SUBSCRIBE
Crossword Get access to over 6,000 interactive crosswords