Dutchman picks up where he left off, scoring two against Wigan to open season with a win 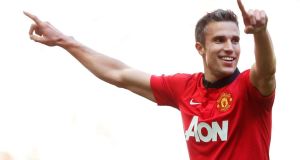 Van Persie struck early in each half to allow United to repel the threat of an enterprising Wigan outfit and claim the Community Shield for the 20th time.

More importantly, it was silverware at the first available opportunity for Moyes, who has such a massive job on his hands after succeeding Alex Ferguson in May. Such is the length of time Ferguson has dominated life at Old Trafford that six of Moyes’s starting line-up were not even born the last time United played in this annual curtain-raiser without the Scot as manager, back in 1985, when Alan Brazil was among the substitutes.

Moyes will be grateful for the squad he has inherited though, particularly Van Persie, who did more than anyone to ensure Ferguson left centre stage as a championship winner.

He took only six minutes to get started today, superbly directing a header into the bottom corner from Patrice Evra’s left-wing cross. It needed a deflection off James Perch to bring United their second on the hour, although Van

Persie will rightly be credited with the goal after cutting inside off a Danny Welbeck pass to drive an effort towards the target.

There was an injury scare for United though, with Rafael limping off in the opening stages, although the Brazilian is suspended anyway for next Saturday’s Premier League opener at Swansea.

With only two wins in pre-season prior to this afternoon, no new signings of any significance and Wayne Rooney’s situation uncertain to the extent he is considered fit enough to face Scotland on Wednesday, but not to even make the journey south for this fixture, Moyes’s transition period has been anything but smooth.

Yet, with the exception of Paul Scholes, he retains the entire squad which won their 20th league championship by 11 points last May, plus Wilfried Zaha, who has finally switched clubs after spending the second half of last season on loan at Crystal Palace.

Zaha was included today, such has been the impact he has made on a journey that has seen United play seven matches in six countries prior to this afternoon’s contest. The England winger flitted in and out, rather like United as a whole in a largely mundane affair.

They did at least play though, which was more than Manchester City managed in May, explaining why Wigan were here in the first place. And the goal Moyes must have craved arrived pretty quickly too. Evra crossed from the left and Van

Persie was left alone to direct his header into the far corner.

After scoring 30 times in his debut campaign for the Red Devils, it had taken the Dutchman just six minutes to open his account this time around.

For a while, with Zaha sparking and Ryan Giggs cajoling from the other flank, it seemed United would run away with the contest. Welbeck came close to turning home a near-post chance and Van Persie threatened once more.

Slowly, Wigan began to grow into the game. The battle between Grant Holt and Nemanja Vidic proved the Latics were willing to match United physically — a sharp change of emphasis from the Roberto Martinez era — and new boy James McClean was a valuable presence out wide.

McClean should have profited from Chris Smalling’s error when the defender — on as an early substitute for Rafael — overran Stephen Crainey’s long ball, gifting the Irishman possession deep inside the United box. Instead of picking out a team-mate, McClean drilled the ball across goal looking for a ricochet, which did not come.

Emmerson Boyce also chose the wrong option when he leapt to meet Ben Watson’s curling free-kick to the far post, heading it back across goal as David de Gea scrambled, expecting to come under direct threat.

Welbeck brought a good save out of Scott Carson before the break but Wigan remained largely on the offensive after it, which would have made United’s second on the hour that much harder to take. Evra, Tom Cleverley and Welbeck were all involved in the Red Devils moving the ball across the field.

Van Persie instinctively cut inside and although it took a deflection off Perch to beat Carson, as the shot was on target, it meant last season’s Golden Boot winner claimed a second, and Moyes claimed the trophy.

All in the Game: Capello plumps for Calamity James over Joe Hart 10:00
The Offload: Roll up for rugby’s very own horror film 09:00
Ken Early on Mick McCarthy II; racing will endure even the harshest criticisms 07:19
Virtual Grand National raises €3m for NHS and Irish Red Cross 06:52
Ken Early: Mick McCarthy II was no blockbuster, more of a flop 07:00