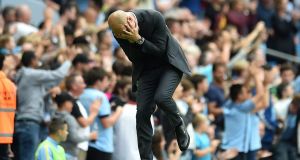 Perhaps the most daunting part for Manchester City’s rivals is that these are still the embryonic stages of Pep Guardiola’s reign, with the players slowly getting used to a new set of ideas, different tactics and a manager who gives the impression that he is only satisfied by the highest forms of excellence. Five games, five wins – Guardiola has had an immaculate start, and still there is the clear impression of a side that can get even better.

That must be a thrilling thought for their supporters when Leroy Sane, one of their expensive summer recruits, has not had the chance yet to demonstrate why Guardiola made him a priority signing. The same applies to Ilkay Gundogan, Guardiola’s first signing, and Claudio Bravo was also in the stands after his €20 million move from Barcelona. Guardiola’s decision not to start his new goalkeeper was a perplexing one – better here, you might imagine, than a debut in the Manchester derby – and threatened to backfire when Willy Caballero came for a cross in the 59th minute, flapped at thin air and Michail Antonio headed in the goal that changed the complexion of this match.

The game had been so one-sided until that point it came as a jolt to discover that City were threatening to waste all their previous good work. They had been exhilarating in the first half but Caballero’s mistake contributed to a nervous final 30 minutes, before Raheem Sterling soothed the crowd’s nerves with his second goal of the afternoon. Guardiola had got away with it to a certain extent – though it would be a brave man to take issue with the new manager’s choices when his team are winning as a matter of routine.

There was, however, one obvious downside for City in the form of Sergio Aguero’s elbow on Winston Reid during the second half and the threat of retrospective action from the Football Association meaning he will be banned from the game against Manchester United on September 10th, as well as Bournemouth’s visit to this stadium the following week and the EFL Cup tie against Swansea City. Aguero had not had one of his better games and perhaps there was an element of frustration in the incident that led to Reid being unable to continue.

Otherwise, this was another day to supply hard evidence that Guardiola’s arrival has rejuvenated Sterling and that City’s other creative players are also relishing the change of manager. Kevin de Bruyne’s free-kick for Fernandinho’s goal was not the only time the Belgian demonstrated there might be no one better in the league when it comes to placing the ball exactly where he wants it. Nolito has slotted seamlessly into the left side of attack and David Silva, that gem of a player, is playing with such distinction his deterioration last season already feels like a distant memory.

For West Ham, still missing the injured Dimitri Payet, there were times, especially in the first half, when the match strayed dangerously close to becoming a full-on ordeal. Guardiola’s players did not just move the ball at uncommon speed, they chased down their opponents with an urgency that was not seen under Manuel Pellegrini. If the players lost possession they did everything to get it back as quickly as possible. It is the mentality that helped make Barcelona such a formidable team under Guardiola’s guidance and, if anything, it was a surprise their first-half superiority did not bring them even more goals.

A common theme throughout Guardiola’s managerial career is that he does not tolerate slow starts. His players are under instructions to pin back their opponents from the beginning and only seven minutes had elapsed by the time the opening goal came.

Silva was prominently involved, as is so often the case, moving across the centre of the pitch, from right to left, and sliding his pass behind the visiting defence for Nolito to reach the byline. Sterling was unmarked in the penalty area and turned the past beyond Adrian, West Ham’s goalkeeper, with a first-time finish.

After 18 minutes, the game had started to feel like a foregone conclusion. Fernandinho had headed in De Bruyne’s expertly taken free-kick and West Ham, with the 20-year-old Ashley Fletcher making his full debut, looked desperately inferior. Yet Antonio has now scored eight headers in the Premier League in the last year, more than any other player, and the latest one gave Slaven Bilic’s team new momentum.

City were aggrieved that the cross came in from Arthur Masuaku when, already booked, the player had caught John Stones’s knee with his studs in a first-half challenge that went unpunished. Ultimately, though, West Ham could not capitalise on that period when the home side suddenly looked a little unsure of themselves. Instead, Silva hit the post in the closing exchanges before playing in Sterling to go around Adrian and roll in a carefully placed shot from a difficult angle.

New Zealand Rugby forced to cancel lower tier competitions 07:20
Harry Kane: I won’t stay at Tottenham 'for the sake of it’ 07:13
Competitive instinct will ensure sport returns as it always was 06:30
Ken Early: Despite coronavirus, Premier League season must be finished if at all possible 06:00
Summer tours next in line for postponement as rugby assesses options 05:00

1 Ken Early: Despite coronavirus, Premier League season must be finished if at all possible
2 ‘Magnificent’ Conor Connelly remembered after sudden death
3 Favourite sporting moment? It’s a bit like choosing your favourite child . . .
4 Harry Kane: I won’t stay at Tottenham 'for the sake of it’
5 Summer tours next in line for postponement as rugby assesses options
Real news has value SUBSCRIBE