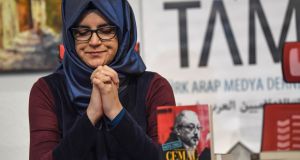 The fiancee of Jamal Khashoggi has called on the Premier League to stop the acquisition of Newcastle United by Saudi Arabia, saying that completion of the deal would tarnish English football and make it complicit in the “cover-up” of the journalist’s murder by the kingdom.

In a letter sent by her solicitors, Hatice Cengiz also challenged whether the £300m takeover of a majority stake in Newcastle by Saudi’s Public Investment Fund (PIF), which is controlled by Crown Prince Mohammed bin Salman, was compatible with the Premier League’s charter. The charter prohibits a club from being controlled by an individual who has engaged in conduct that would be “an offence” if it had occurred in the UK.

Cengiz’s lawyer, Rodney Dixon QC, said: “The proposed acquisition is not just ‘business’ for the crown prince and the Saudi authorities, but an attempt to evade justice and international scrutiny for an unconscionable act. It would emasculate the Premier League’s core principles and rules, and ruin its good reputation and character, to allow the crown prince and the Saudi authorities to use this acquisition to seek to repair their international standing.”

Khashoggi, a US-based journalist for the Washington Post, was murdered inside the Saudi consulate in Istanbul in October 2018. Khashoggi had entered the consulate to retrieve documents he needed to marry Cengiz, who has emerged as a strong voice in support of justice after his murder.

An investigation by Agnès Callamard, the UN special rapporteur on extrajudicial killings, found that Saudi Arabia was responsible under human rights law for the murder of Khashoggi and that it was “inconceivable” the operation that resulted in his death could not have been implemented without the crown prince being aware a criminal mission was being launched against the journalist.

In the letter to the Premier League chief executive, Richard Masters, Dixon said there were “no limits” to the exploits of Bin Salman and his government. He cited a Guardian report that revealed UK authorities had been warned by intelligence agencies that Saudi Arabia planned to target and surveil Cengiz in London months after the murder of Khashoggi.

In a separate statement on Tuesday, Cengiz said any deal by Saudi-controlled funds to buy Newcastle was a “desperate attempt to save [BIN SALMAN’S]reputation”.

“I trust the Premier League and British authorities value their own principles and reputation above this transparent attempt at sports-washing,” she added.

Saudi Arabia has not confirmed its intention to buy an 80 per cent stake in Newcastle but on Tuesday documentation lodged with Companies House revealed the name of a potential new club director, indicating the deal could soon be done.

The British government has indicated it would not intervene in the controversial deal and, when asked about the matter recently, emphasised the UK’s close relationship with the kingdom.

Oliver Dowden, the culture secretary, was questioned on the issue by the SNP MP John Nicolson during a meeting of the digital, culture, media and sport committee and said it was a “matter for the Premier League” rather than Downing Street.

Amnesty International has warned the Premier League it “risks becoming a patsy” if it does not consider Saudi Arabia’s human rights record before approving the takeover. - Guardian