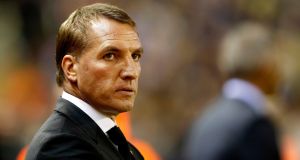 Brendan Rodgers: Including the dismal end to last season, Liverpool have taken only 16 points from their last 15 Premier League games. Photo: Peter Byrne/PA

It is not, of course, as easy as that, partly because the club that aren’t in transition tend to be perceived as in stagnation (and that leads to boredom, which is the worst crime of all in the soap opera morality of the Premier League), and partly because, if you’re not one of the absolute elite, other clubs keep buying your players.

For Rodgers, though, the excuse, whatever validity it may have, is sounding increasingly tired. Anfield is ripe with the stench of resignation.

Rodgers arrived at Liverpool in 2012 with a philosophy. He wanted to play the possession-based football that had served him so well at Swansea City. He offloaded Andy Carroll at a significant loss because he didn’t fit in. Liverpool finished seventh.

He recognised that in Luis Suarez, Daniel Sturridge and Raheem Sterling, he had three attacking players of tremendous pace and so he changed the style to something more direct. For a while Liverpool’s football was breathtaking but then they naively fell into Jose Mourinho’s trap. But still, they finished second.

But then Suarez left and Sturridge was injured and Rodgers had to rethink. A raft of new players arrived, he fiddled around, came up with a 3-4-2-1 and the results achieved in the first flush of that experiment propelled Liverpool to sixth. Then Sterling left and a raft of new players arrived and Rodgers is fiddling around again, his problems exacerbated by the loss of his captain Jordan Henderson to a broken bone in a foot.

Liverpool did eventually beat Carlisle United, sparing Rodgers a Roy Hodgson and Northampton Town-style humiliation, but one goal from 47 attempts in two hours against a League Two side suggests both a lack of fortune and a lack of precision. Luck is turning against him.

Losing Christian Benteke for a couple of weeks just when they need results is unfortunate; it’s doubly so that the toothlessness against Carlisle should come in a week in which Mario Balotelli and Iago Aspas, two players who did not succeed at Liverpool, should score goals for their new clubs.

Yet in the first half away at Arsenal, they looked excellent. At other times they’ve looked stodgy. It has, in other words, been just what you would expect from a new team finding its way. A lot of getting to know you, with occasional moments at which it all clicks.

But after six league games, Liverpool have won only twice, against Stoke City thanks to a screamer from Philippe Coutinho, and against Bournemouth thanks to a goal that should have been ruled out for offside.

There is an understandable restlessness about Anfield, a sense that the same old pattern is repeating itself.

Liverpool over the past three seasons have had the fifth highest average wage bill in the league. Their average position in that time is fifth. This is what they are.

It’s reasonable to ask, given how many flops they have had, whether they are investing their money as wisely as they should be . Was Danny Ings really bought. to play on the left? What does Roberto Firmino do? But it is equally true that without regular Champions League football and with their level of spending (on transfers and wages), the players they sign are never going to be fully formed. They are shopping for B+ players who may develop rather than A-grade stars. They are trapped in their economic reality

Last season, after Liverpool had gone 13 games unbeaten following Rodgers’ switch to three at the back, there came the stories about how he had come up with the system after long nights of fretting, sustained only by tea and toast.

And of course the next day, Manchester United won 2-1 at Anfield, Steven Gerrard was sent off and Liverpool began the slump from which they are yet to escape. It appears Liverpool are doomed to haunt the outskirts of Champions League qualification. Whoever is manager will find themselves constrained by the same economic realities.

There’s nothing Rodgers can do about that, but the modern way is to blame the manager, replace him, and begin another cycle. The ousting of Colin Pascoe and Mike Marsh from his coaching staff at the end of last season felt a significant step towards Rodgers’s exit. It feels even closer now.