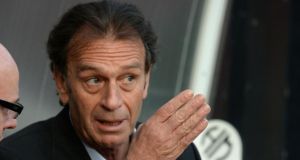 Massimo Cellino has been disqualified from owning Leeds United by the Football League.

The Italian businessman was originally allowed to take control of the Championship club after successfully appealing against its original decision to disqualify him after being found guilty by a Sardinian court of failing to pay import tax in March.

However, a statement relased on the Football League’s website on Monday confirmed that the 58-year-old has now been barred from taking ownership under the terms of its Owners’ and Directors’ Test after receiving full details of the court’s judgment.

“At its meeting last week, the Board considered the reasoned Judgment of the Italian Court against Mr. Cellino, having successfully applied to the Italian Courts for its full disclosure,” read the statement.

“The Board considered detailed legal advice and agreed unanimously (with the exception of its Chief Executive, Shaun Harvey, who did not take part in the debate or vote having declared an interest) that Mr. Cellino is subject to a disqualifying condition under the terms of the Test.

“Mr. Cellino is entitled to appeal the Board’s decision to the PCC within 14 days. As the Judgment of the Italian Court has not been published in Italy, The Football League will not make any of its contents public.

“Additionally, the Board concluded that it was appropriate to ask an independent Football Disciplinary Commission (FDC) to consider whether Mr Cellino and/or Leeds United breached League regulations relating to the timely disclosure of relevant information. The matter will be heard by an FDC in due course.”

Leeds have released a statement in response to the decision to disqualify Cellino, it said: “The club is in the process of taking legal advice on the reasoning of the decision. In the interim, the club notes that nothing has changed since the decision of the Football League’s Professional Conduct Committee in April 2014.

“The steps that the League wishes the club to take – to remove Mr Cellino only to re-appoint him in three months’ time - will be destabilising for the club, its supporters and sponsors and cannot be in the best interests of any party.”