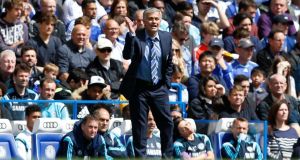 Jose Mourinho insisted Chelsea did everything required of champions as he hit out at criticism of the Premier League winners’ approach.

A 1-0 win over Crystal Palace gave the Blues an unassailable lead at the summit and a fourth Premier League title in 11 seasons.

It was Mourinho’s third – drawing him level with Bill Shankly, Arsene Wenger and Stan Cullis – and first of his second spell.

Chelsea, by the Portuguese’s own admission, became “more strategic, less artistic” as the title neared, with detractors labelling the Blues “boring”.

Mourinho, who values substance over style, dismissed those who had the temerity to criticise his side.

“We do everything that the team needs,” Mourinho said. “That’s why we deserve so much to be champions. And I think everybody knows that.

“And the ones that have a big face to say we don’t deserve are the ones that in my country we say: the dogs bark and the caravan goes by.

“(It’s) easy to be a pundit, because as a pundit you win every game. Fantastic job.

“Maybe in 10 years’ time it’s my job. And then I win every game. Now as a manager I lose sometimes and it’s a much more difficult job.

“What the players are feeling now is fantastic. They deserve.”

Mourinho returned for a second spell as Chelsea boss in June 2013 and now in his second season has won the Capital One Cup and the Premier League, taking his personal trophy tally to 22.

“When you go back to a place where you had success before you risk a little bit of your prestige, your history. I risked it,” Mourinho added.

“This amazing team that was Chelsea’s team for a decade is not here any more. And a new team won again.

“Now I can say I won titles for Chelsea with two different generations, separated by almost a decade.”

Mourinho made a veiled criticism of rival Pep Guardiola, whose Bayern Munich are the dominant team in Germany, and spoke of enjoying the competitive nature of English football.

Mourinho added: “Maybe in the future I have to be smarter and choose another country, another club, where everybody’s champions. Even the kit man coaching is champion in some countries.

Mourinho is two years into a four-year contract of his second spell and received the congratulations of owner Roman Abramovich afterwards.

“I stay here until Mr Abramovich wants me to stay. The day he tells me to go, I go,” the Blues boss added.

“I was with TV, just a hug and a hug means more than words.

Mourinho’s side needed three points to claim the trophy with three games to spare and Eden Hazard headed in the rebound after seeing his first-half penalty saved by Julian Speroni.

Chelsea have led for some time and suffered just two defeats all season – on December 6th at Newcastle and January 1st at Tottenham, when Manchester City drew level at the top of the table.

The challenge of each of the Blues’ rivals faltered at varying times and Mourinho knew the title was his side’s to lose, but insisted on taking a game-by-game approach.

“We were convinced for a long time,” he said. “Champions now. Not one hour ago, not yesterday, or a week or one month ago. Champions now.

“From that moment (the loss to Spurs), January, February, March, April, not one single defeat.”

“(But) I think top four in this country, for the top teams, is the first target.”

Ramires was a late withdrawal from the Chelsea side through illness and went to hospital to be assessed.

Mourinho said: “Ramires went to the hospital, he was feeling so bad.”

Palace boss Alan Pardew felt the penalty award was “questionable” and that his side might have had their own spot-kick when John Terry blocked a Jason Puncheon shot, with the ball hitting the Blues captain’s shoulder and upper arm before going clear.

“I do feel a little bit hard done by,” Pardew said. “It was kind of questionable. Then they get another break when he misses it and it goes straight to him.

“(But) it’s not about us today. They’ve obviously done the job. Sometimes fantasy and flair goes out the window to do the job to win.

“That’s why this guy (Mourinho) earns the money he earns, because he wins and he wins trophies.”