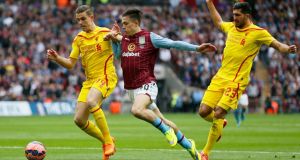 The restorative powers of Tim Sherwood know no bounds. A first FA Cup final in 15 years awaits an Aston Villa side that was in fear of its Premier League status when their new manager breezed into the club two months ago.

For Brendan Rodgers, Steven Gerrard and Liverpool, however, the so-called dream farewell lies in tatters.

So much has been said and written about Gerrard’s glorious Liverpool career ending with the FA Cup on his 35th birthday on May 30th that Villa were almost relegated to a sideshow in the build-up to this semi-final.

Instead, Liverpool froze, Rodgers was tactically out-witted by Sherwood and it was the Villa midfield of Fabian Delph, Jack Grealish and Tom Cleverley who dominated Gerrard and company. Republic of Ireland under-21 star Grealish exited to a standing ovation.

Gerrard left Wembley for the final time with sporting hand-shakes and congratulations to the better team throughout.

There was a controversial finish with Liverpool substitute Mario Balotelli having a late equaliser wrongly disallowed for offside but no-one could dispute the merits of Villa’s place against Arsenal next month. Without an unlikely reprieve in Champions League qualification, Rodgers may find himself under serious examination following this display.

But for a brief spell that produced the opening goal for Philippe Coutinho, the 25 points and 10 places that separated the semi-finalists in the Premier League appeared an illusion with Villa by far the more confident, vibrant and purposeful team.

The side mired in relegation trouble all season had a clear understanding of what their manager wanted. Liverpool were subdued and confused by contrast, out-numbered and over-run in central midfield from the opening whistle with their defence allowed little time to build from the back. Villa’s front three pressed to the same telling effect as Manchester United and Arsenal did in their recent league wins over Rodgers’s side.

Sherwood suffered disruption before and during the tie with Gabriel Agbonlahor failing to recover from a hamstring injury sustained last weekend at Tottenham Hotspur, where the liberating effect of Villa’s 1-0 win resonated at Wembley.

In the absence of Agbonlahor, Grealish and Charles N’Zogbia complimented the power of Christian Benteke with tireless, creative performances in attack. The 19-year-old Grealish in particular relished the occasion, driving at Emre Can throughout and posing a constant threat around the Liverpool area.

Simon Mignolet produced the first save of the semi-final from N’Zogbia after Benteke and Delph combined to invite the French midfielder to shoot from 18 yards. N’Zogbia almost returned the favour to the in-form Benteke but Dejan Lovren made a vital interception to prevent the striker running clear on goal.

All Liverpool had to offer in the opening 25 minutes was an optimistic penalty claim. Delph caught Raheem Sterling’s heel as the 20-year-old, initially leading his side’s attack in place of the absent and unreliable Daniel Sturridge, raced into the area, but referee Michael Oliver was rightly unmoved.

It took another injury blow for Villa and an overdue tactical switch from Rodgers to inject menace and urgency into Liverpool’s performance. Nathan Baker was only recalled to the heart of defence due to Ciaran Clark’s knee problem but the brittle defender’s first start since Liverpool’s 2-0 win at Villa Park in January lasted all of 25 minutes. Jores Okore had to replace Baker after he pulled up having beaten Joe Allen in an aerial challenge.

Seconds later the Liverpool manager abandoned his three-man defence and the experiment of Gerrard operating anonymously behind Sterling to go to 4-3-3. Suddenly Liverpool had the impetus and the lead.

Coutinho had been the driving force behind Liverpool’s run to the semi-final and started the move by picking out Jordan Henderson’s run into the penalty area. The midfielder’s cross should have been routine for Okore but Villa’s fourth choice centre half dwelled too long on the ball, Delph was also unable to clear, and Liverpool regained possession on the edge of the box. Sterling switched the play into Coutinho’s darting run and the Brazilian, under pressure from three Villa defenders, tucked a shot beyond Shay Given via Okore’s right knee.

Villa’s momentum and belief, however, could not be checked and they were level within six minutes. Delph had a commanding game in central midfield and, having sprinted down the left before exchanging passes with Grealish, delivered an inviting pass into Benteke lurking with intent just inside the Liverpool area. The Belgium international stroked a confident finish out of Mignolet’s reach for his ninth goal in seven games.

Rodgers introduced Balotelli at the interval in the search for Liverpool’s waylaid threat but the flow of the game remained unchecked.

Alarmingly for the Liverpool manager, his team’s defending deteriorated and Delph took full advantage to put Villa deservedly ahead from a fine team goal. The Villa captain broke from the centre circle and found Benteke, his back-heel found Grealish who spotted that Delph had continued his run into the area. Collecting Grealish’s measured pass, Delph cut back inside the flat-footed Lovren and Can before beating Mignolet from close range.

The response from Liverpool was minimal until the final moments and Villa had chances to extend their lead only for Kieran Richardson to shoot wastefully over and Leandro Bacuna to pick the wrong pass into Benteke with N’Zogbia completely unmarked.

Finally the men in yellow stirred to set up a tense finale. Lovren put a free header over from Gerrard’s corner, Richardson cleared off the line from the Liverpool captain’s header at a Coutinho corner and then came a moment of huge controversy. Balotelli latched onto Gerrard’s raking pass out of defence, controlled superbly on his chest and sent a cool finish past Given. Villa were spared by an offside decision that never was and, seconds later, Liverpool were on their knees and out.