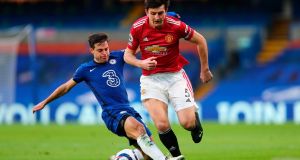 Harry Maguire is unlikely to be summoned to court for his appeal hearing in Greece this year amid a backlog in the country’s judicial system because of the coronavirus pandemic, leaving the Manchester United and England defender free to focus on his football, including the European Championship this summer.

Maguire was found guilty of aggravated assault, resisting arrest and attempted bribery in August 2020 following a holiday on Mykonos and it was believed he would be called before the summer for an appeals court hearing on Syros, the capital of the Cycladic island chain.

However, a judicial official told the Guardian on Friday that this was now unlikely on account of the tribunal’s case load having piled up because of the pandemic.

“Only emergency cases are being held,” the official said. “We have a backlog dating back several years and every week there are adjournments. Very probably this case will not be heard for all of 2021.” United did not want to comment on the latest developments on Friday.

The defender was arrested after a brawl outside a Mykonos town bar led to a run-in with undercover policemen attempting to break up the fracas. Maguire, who turned 28 on Friday, has vigorously denied the accusations, with his defence team calling them “wrong and misleading”.

Days after his arrest, the England international told the BBC his conscience was clear and described how he had been “scared for my life” and afraid he was being kidnapped when the officers initially detained him on the party isle.

After being handed a 21-month prison sentence, suspended for three years, the defender immediately appealed against the verdict. His two co-defendants, who included his footballer brother Joe, were given 13-month suspended sentences. They have also appealed. All three were allowed to walk free after the court acknowledged their clear criminal records.

Under Greek law an appeal amounts to a retrial with the higher tribunal having up to eight years to hear the case. When it does take place Maguire will face a three-member panel of appeals court judges, also on Syros.

Last month, Panaghiotis Poulios, the island’s chief prosecutor, contracted Covid, further adding to delays. But while legal proceedings in theory could take place as late as 2028, Ioannis Paradissis, the prosecution lawyer handling the case, said there was a desire to have it wrapped up as soon as possible. “My clients want to see the end of this matter,” he said.

The lawyer, who represented two of the policemen who appeared as key witnesses during last year’s one-day trial, reiterated that if Maguire apologised he would likely be treated “more leniently” by the appeals court judges.

“In Greek criminal law if an apology is made, if you accept you are guilty, you are treated more leniently,” he told the Guardian. “My clients were just doing their jobs and were injured in the incident. They are still expecting an apology and living in hope that, before long, he will say sorry to them.” - Guardian

Lions squad set to have a greater spread than four years ago 22:00
Warren Gatland hopeful that Lions itinerary will be finalised this week 22:00
Blackmore back among the winners at Fairyhouse 22:00
Elite athletes still required to undergo 10-day mandatory quarantine 20:32
Klopp says Liverpool need ‘perfect performance’ to overcome Real deficit 20:00