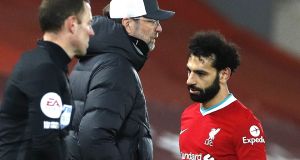 Liverpool’s Mohamed Salah passing manager Jürgen Klopp after he is taken off during the match against Chelsea in Liverpool. Photograph: EPA/Phil Noble

Jürgen Klopp has claimed failure to qualify for next season’s Champions League would not damage Liverpool long term or prompt any player to seek an exit.

Liverpool’s prospects of finishing in the top four receded on Thursday when suffering a fifth successive home defeat for the first time. Klopp accepted the 1-0 defeat against Chelsea could undermine belief in his methods.

“If you want to doubt me and the team in this moment, I think that it is possible because of the results,” Klopp said.

However, he was defiant on Liverpool’s ability to withstand a season without Champions League football, and to avoid the internal problems that occurred when the club slipped out of the European elite under Rafael Benítez in 2010.

Klopp, who had spoken of the financial importance of Champions League qualification before the Chelsea defeat, said: “This club will not be a regular out of the Champions League. This year is difficult, we know that, but the potential and the power of the club is a completely different one. We have the squad together if they are not all injured. I do not know the team from 10 years ago, but we are ready for a battle in this era and with the team we have together.

“Seasons have momentum, and we never really got it this year, that is true. But this club is in a really good position. It is a difficult time, obviously, but we are in a better position than other clubs, I would say.

“I did not think about what happened in the past, but what I can say is nobody has to worry about the future of the club because it is in good hands and has a really good team together.”

Mohamed Salah’s Liverpool future was under scrutiny before his angry reaction to being substituted against Chelsea. Salah’s agent, Ramy Abbas Issa, posted a cryptic tweet of a full stop during the game, but Klopp claimed there would be no exodus of star talent should Liverpool fail to secure Champions League football.

“That is nothing we have to worry about,” the manager said. “I know we have loyalty from the players. It is not a situation where a player in the squad says: ‘we are not in the Champions League so I have to leave.’ That will not happen. I know them well enough to know that. The club is in a different situation, and it will not be an issue with new players.

“We all expect more from us. I don’t feel that the team leaves me alone, standing in the fire. In this situation in Germany typically the CEO, or the president or the sporting director gives an interview and is asked: ‘Is he still the right coach?’ Then they have to say: ‘Yeah, yeah, we trust him’ and all those kinds of things. The first moment you have to say that then he is already half way out the door.