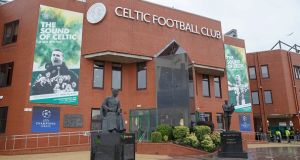 A former Celtic kitman, Jim McCafferty, has been arrested in Belfast after admitting to abusing youth players at the club during the 1990s. Photograph: Getty/ Steve Welsh

A former football coach has been arrested in Northern Ireland over sex abuse claims.

Jim McCafferty, 71, who was involved in football in Scotland and Ireland from the 1980s, was arrested in Belfast by the Police Service of Northern Ireland (PSNI) after walking into a police station.

It follows an interview that McCafferty, originally from Wishaw, North Lanarkshire, gave to the Irish Mirror newspaper.

McCafferty, who now lives in Belfast, was formerly a kit man at Celtic, Hibernian and Falkirk.

Detective Superintendent Deirdre Bones, from the PSNI’s public protection branch, said: “A 71-year-old male has been arrested by detectives after presenting himself at a station in Belfast.

“He was arrested on suspicion of sexual offences against children in Northern Ireland. He is currently helping police with their inquiries.”

In Scotland, police say they have received information about alleged historic offences and will investigate.

A police spokesman said: “Police Scotland has received a report of non-recent sexual abuse and will commence inquiries to establish the full circumstances surrounding this matter.”

McCafferty had spoken to the newspaper of a campaign of sexual abuse of young footballers over two decades, he said: “I understand it was wrong, I was wrong and I did wrong and I am sorry.

“I have remorse. I know if I’m found guilty I will have to serve time and in my mind, I’ve said to myself that that’s what I’ll have to pay back for what I’ve done and I’m OK with that.

“I hope that will cleanse my soul. I’ll take what’s coming, there’s no getting away from it.”