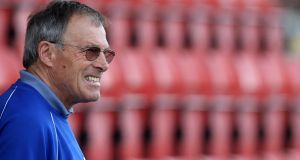 The English FA are investigating Dario Gradi over claims he tried to ‘smooth-over’ sexual abuse at Chelsea. Photograph: Getty/Catherine Ivill

Dario Gradi is to be quizzed by a team of investigators working on behalf of the Football Association after claims that he visited the parents of a Chelsea youth-team player to “smooth over” a complaint of sexual assault against Eddie Heath, the chief scout who has been identified as a repeat offender in the 1970s.

Gradi, currently the director of football at Crewe Alexandra after more than 30 years in senior roles with the club, will be asked for his version of events after being identified as the man Chelsea sent to deal with a complaint that Heath had indecently assaulted the boy, then 15.

Gradi, then in his early-30s, was assistant manager at Chelsea at the time and is said to have told the victim’s family that he knew Heath was “closer” to boys than he should have been. Chelsea never took any action against Heath and the FA’s independent inquiry, among a wide-ranging investigation expected to take many months, wants to interview Gradi about what the club knew, what they did about it and whether there was a cover-up.

That investigation will be led by a newly appointed QC, Clive Sheldon, who is in the process of appointing a back-up team to go through what has been described as a “tidal wave” of calls since Andy Woodward’s interview in the Guardian instigated what the FA’s chairman, Greg Clarke, has described as the worst crisis he can remember in the sport.

Heath will feature prominently in the investigation after Chelsea admitted they paid £50,000 hush money to one of their former players, Gary Johnson, to spare themselves any damaging publicity about a scout who died in the late-1980s.

In the case said to have led to Gradi’s intervention, the player had been at Chelsea for two seasons when Heath, known as “the Star Maker” because of his work in the club’s junior set-up, is said to have begun touching him inappropriately. “He would put his hands up your shorts, touch your genitals and laugh,” the man, now 59, told the Independent last week. “Sometimes you would be able to fend him off. Other times he would catch you unawares.”

The incident that led to the boy telling his parents what happened in 1974 and they immediately telephoned Chelsea to report their employee. Gradi is said to have arrived at the house in the following days and, despite the serious nature of the claims, Heath remained at the club for another five years.

“He [GRADI]came to visit my parents and me to smooth it over,” the former player said. “I remember him saying something like: ‘[WITH] Eddie, [FOOTBALL]is his life and he gets a bit close to the boys. I’m sorry if he’s overstepped the mark in his fondness this time.’ He [GRADI]was told about this incident, that Eddie Heath had interfered with me several times and that I was fed up with it. He stayed for about an hour. He talked about how good this youth team was at the time and that he had a good crop of players. The conversation went off at tangents.”

Gradi, now 75, responded on Friday with a statement that did not refer to the specific allegations. “Aside from denying any wrongdoing, it would be inappropriate and unfair on all parties to comment piecemeal through the media at this time in connection with historic allegations. Suffice to say, I will do everything within my power to assist all investigatory authorities into what is becoming a wide-ranging and important enquiry into historic sexual abuse.” A spokesman for Crewe followed that up on Tuesday by saying Gradi would “fully co-operate with the FA”.

Hundreds of other former players have been in contact with the police since Woodward, formerly of Crewe, Bury and Sheffield United, waived his anonymity to speak to the Guardian, and the FA is promising there will be full disclosure of its findings, subject to legal restrictions. “The overriding objectives of the review are to ensure that any possible failings by the FA and clubs at the relevant time are brought to light and to ensure that lessons are learned so any identified failings are not repeated,” the FA said in a statement.

At least 18 different police forces are involved in their own inquiries, with the last confirmed figure being that around 350 people had initiated complaints and the distinct probability, coming up for a week later, that the figure is considerably higher now. Steve Walters, another former player who waived his anonymity to tell his story to the Guardian, has said he alone has been contacted by 50 former professionals. Walters also said he was disappointed that the police had yet to take an official statement from him.