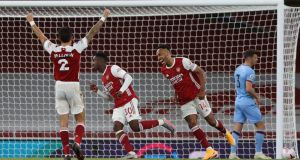 A late goal from substitute Eddie Nketiah gave Arsenal a 2-1 home win over West Ham United in the Premier League on Saturday after Michail Antonio’s first-half strike for the visitors had cancelled out Alexandre Lacazette’s 50th goal for the Gunners.

West Ham were more organised playing with a five-man defence than in their opening 2-0 home loss to Newcastle United as they faced an Arsenal side fresh from a 3-0 win at promoted Fulham.

But the hosts broke through in the 25th minute when captain Pierre-Emerick Aubameyang, fresh from signing a new three-year deal, sprang onto a through ball down the left and chipped across to Lacazette, who headed past keeper Lukasz Fabianski.

The visitors had a decent claim for a penalty shortly before halftime when Arsenal’s new signing Gabriel Magalhaes appeared to handle but the video assistant referee judged otherwise.

West Ham levelled just before halftime with a brilliantly worked move from deep in their own half. Tomas Soucek ran the ball through the middle and sent a pass wide to Ryan Fredericks who whipped it into the path of Antonio to net from close range.

The Hammers forward has scored nine times since play resumed in June after a three-month break due to the new coronavirus, more than any Premier League player apart from Raheem Sterling.

Antonio nearly doubled his tally with another tap-in shortly after the restart, but Arsenal keeper Bernd Leno got down at his feet to smother the ball right on the goalline.

Instead, Nketiah claimed all three points for the hosts when he latched onto a Dani Ceballos layoff in the 85th, having come on less than 10 minutes before to replace Lacazette.

“It’s nice to get on and help the team win,” Nketiah told Sky Sports. “It’s a great feeling to come on and score.”

The victory means Arsenal have won 11 of their past 12 home games against the Hammers in all competitions.