Coutinho inspirational as Liverpool limber up for Premier challenge 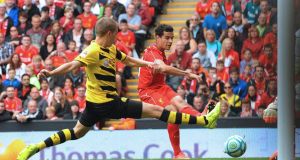 Liverpool’s Philippe Coutinho scores the third goal during a pre-season friendly against Borussia Dortmund at Anfield.

Liverpool 4 Borussia Dortmund 0 The World Cup heralded misery for Liverpool’s forward line this summer, even the one not involved. Philippe Coutinho told a Brazilian radio station on Saturday that he was smarting at his omission from Luiz Felipe Scolari’s squad but vowed “to use this anger and push myself to my limits”.

To borrow a phrase from Dr David Banner, Liverpool’s rivals will not like Coutinho when he is angry on the evidence of this eye-catching defeat of Borussia Dortmund.

Coutinho received a standing ovation when replaced by Jordan Ibe in the 72nd minute at Anfield and with some justification. The gifted Brazilian was inspired against Jurgen Klopp’s side, creating the opening goal for Daniel Sturridge with a sublime touch, scoring the third and reassuring the Liverpool faithful that quick thinking, telepathy and creativity has not disappeared from the team along with Luis Suarez.

“I see Coutinho becoming a big talent in world football over the next four or five years for Liverpool and Brazil,” said his manager, who revealed earlier this summer that the Brazilian is to be offered a new contract at Anfield.

“He is a magical operator. He came into this country and lit it up with his quality and now he has an opportunity this season to do it in the Champions League. It is about sustaining his level on the big stage now. I’m sure he will. He is so gifted and his ability to get out of tight situations, his view of the game, is magical.”

An angry Coutinho and the maturing Raheem Sterling were in devastating form ahead of the Premier League opener against Southampton and Liverpool’s creative threat will be supplemented this season by Lazar Markovic and Adam Lallana, the two new signings missing here through injury.

Daniel Agger was absent too, though Rodgers claimed that was for fitness reasons.

New boys also impressed for Liverpool, Dejan Lovren especially. The €24 million signing from Southampton was one of three summer additions to start against Dortmund, the right-back Javier Manquillo and the central midfielder Emre Can the others, and caught the eye with his strength, aerial presence and accurate left foot. The watching Southampton coaching duo of Ronald Koeman and Sammy Lee received an unnecessary reminder of what they have lost.

“I was really pleased with all the new signings,” Rodgers added. “Dejan is perfect, exactly what we have been looking for since Jamie Carragher retired; a dominant, No1 centre-half who reads the game really well. I thought Manquillo was outstanding too. He is only 19 and it was his first game at Anfield. He is the type of full-back I like; he gets tight to people, stops crosses coming in and has the energy to get forward.”

The central defender picked out Coutinho in space deep inside the Germans’ half and the Brazilian put Sturridge clear with an exquisite flick over the Dortmund rearguard. Sturridge had time to pick his spot and finished low into Mitchell Langerak’s far corner. Three minutes later it was two when Lovren powered home a far-post header from a Steven Gerrard corner.

Last season’s league and cup runners-up in Germany could not contain the outstanding combinations between Coutinho, Sterling and Sturridge, who showed that, while a world-class piece of last season’s forward line has gone, Liverpool’s style will remain.

Sterling seized on a loose pass across the Dortmund defence to create the third for Coutinho with a fine pass that Liverpool’s No10 slipped into the far corner.

The fourth followed a mesmerising Liverpool attack that had appeared to break down when Sturridge failed to connect with Coutinho’s pass, only to retrieve a seemingly lost cause and set up Jordan Henderson for a tap-in. Guardian Service

Munster cruise past Ospreys on a dead rubber day at Thomond 15:47
Real Steel sees off stablemate Footpad at Thurles 15:36
14-man Saracens on the brink of last-eight after edging Racing 92 15:50
Class is permanent for Lee Westwood as he claims Abu Dhabi title 13:43
Saracens accept Premiership relegation and issue apology 11:05