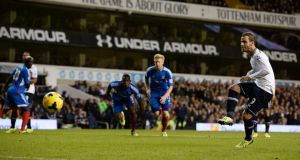 Tottenham 1 Hull 0: The ball did hit Ahmed Elmohamady’s hand. At least, the referee Michael Oliver could cling to that. And yet it was impossible to escape the feeling that the Hull City midfielder and his team had been wronged. A ripple of surprise went around White Hart Lane when Oliver pointed to the penalty spot and Roberto Soldado’s conversion represented the roughest justice for the visitors. Having fought for so long, they departed with nothing.

Tottenham had laboured yet everything changed in the closing stages when Jan Vertonghen whipped over his cross from the left. The ball hit Elmohamady’s leg and reared up to strike his hand. It was travelling at pace. He was no more than five yards away and he had also seemed to turn his back. In other words, there was surely no intention. Steve Bruce, the Hull manager, fumed.

Soldado showed no sympathy. Just as he had done at the beginning of the season against Crystal Palace and Swansea City, he scored the minimum of fuss to give his team the 1-0 win. Tottenham were not awarded a single penalty last season. Their luck has turned. “One-nil to the referee,” the Hull fans sang.

Bruce’s team had arrived with injury problems and the resolution to mass 10 men behind the ball to make life difficult for Tottenham. He demanded blood, sweat and tears and he got his wish. Yet there was more to the visitors than committed defending and intensity, at least in the first-half.

They had a willing runner in Yannick Sagbo at the tip of their formation and, behind him off the left, George Boyd was direct and dangerous. Sagbo demonstrated his pace and power when he outstripped Sandro to force Hugo Lloris into a sprawling save and it was not the only time that Hull quickened the pulses before the interval.

They shouted loudly for a penalty when Kyle Walker bundled into Paul McShane while shots were blocked and Tom Huddlestone caught a 32nd minute drive sweetly but the ball flew high. A rare Huddlestone goal would not only have marked a sweet return to his former club, it would have allowed him finally to get a haircut. He has a bet for charity to avoid the clippers until he scores.

Tottenham had chances in the first half but they laboured for rhythm, which is not entirely unusual at White Hart Lane, where they can take time to come to the boil. Passes went astray and André Villas-Boas simmered. The crowd chuntered.

Paulinho guided a volley over the crossbar from Lewis Holtby’s free-kick; Andros Townsend, who looked lively, drew a save from Steve Harper from 20 yards; Soldado almost got a touch to Paulinho’s cross and Walker’s blast stung the goalkeeper’s palms.

Tottenham have had to show patience at this stadium and Villas-Boas did his usual rejigging in the search for the breakthrough. Having started Aaron Lennon on the left, he switched him with Townsend at the beginning of the second-half while Mousa Dembélé replaced the more defensively-minded Sandro.

Erik Lamela’s thoughts would have been interesting. Townsend and Lennon currently stand ahead of him in the pecking order. The €35 club record signing, an unused substitute here, has yet to start a Premier League game. Villas-Boas sent on Christian Eriksen for the below-par Holtby and he went to two strikers with the introduction of Jermain Defoe.

Hull broke less frequently in the second-half but their focus, which was epitomised by Republic of Ireland midfielder David Meyler, was unrelenting. Some of their players went down and stayed down, which irked the Tottenham support. When Walker attempted to take a quick throw-in as Curtis Davies lay prone, Bruce confronted the Tottenham defender on the touchline. The fourth official stepped in.

Tottenham looked to have run out of ideas. Before the penalty, they had threatened in the second-half only when Townsend released Soldado and his shot was pushed away by Harper. But one blast from Oliver’s whistle changed everything.

There was drama afterwards when Townsend fell head-first over the advertising hoardings to require lengthy treatment and Huddlestone fizzed a free-kick narrowly wide at the very last. But there could be no escaping the talking point.

At Liberty Stadium, West Ham picked up a hard-earned point on the road with a turgid goalless draw with Swansea.

Jussi Jaaskelainen made two point-blank stops to deny Chico Flores and Wilfried Bony at the other end, and the hosts also had a late penalty appeal for handball against Joe Cole turned down as Swansea were left frustrated as the game finished 0-0.

While neither side picked up the three points, Sam Allardyce will be the happier of the two managers as his decision to again play without a recognised striker for much of the game paid dividends as they restricted Swansea’s space in the middle of the park.

They also highlighted Swansea’s discomfort defending set-pieces, which has been no secret given their relative lack of height, and it proved a recurring theme throughout the contest and will almost certainly have been noted by Cardiff ahead of next weekend’s south Wales derby.