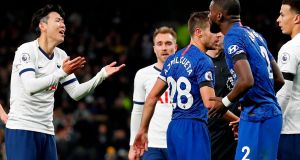 English football’s racism crisis took a new twist after it emerged that a Chelsea supporter was arrested for allegedly racially abusing Tottenham Hotspur’s Son Heung-min on Sunday– during the Premier League match that had to be paused because a monkey chant was aimed at Chelsea’s Antonio Rüdiger by members of the home crowd.

Anthony Taylor, the referee, stopped play after Rüdiger claimed he had heard racist taunts during the second half of Chelsea’s victory over their London rivals. An announcement on the public address system informed the crowd at the Tottenham stadium that “racist behaviour from spectators is interfering with the game”. The announcement was made on two further occasions, in line with Premier League protocols.

Spurs have vowed to take the “strongest possible action” against anyone found guilty of abusing Rüdiger, who is understood to have been left angry following the latest example of the racism blighting the game. The alleged abuse occurred shortly after he had been involved in the incident that led to Son being sent off.

The Metropolitan police are investigating the alleged racist chanting and it also confirmed that a supporter was ejected from the ground and arrested after committing a racially aggravated public order offence. It is understood the supporter targeted Son, who did not hear any insults aimed at him, and the incident was reported to the authorities by other Chelsea fans.

A spokesman for the Met said: “Police were made aware of alleged racist chanting during the second half of the Tottenham vs Chelsea match on Sunday December 22nd. Officers will work with the club in an attempt to identify any people responsible.”

Tottenham added that they are “exhaustively investigating” the allegations made by Rüdiger, promising to impose life bans on anyone found guilty. “We have engaged lip readers to study the footage and contacted Chelsea for further information from their players,” read a statement.

The Spurs manager, José Mourinho, believes that self-policing from supporters is a positive step. “If I have to say something it is to ask my supporters, the Tottenham supporters, to keep doing exactly the same that they are doing with the team, which is supporting the team in a season that has not been easy at all,” he said. “To ask them to be exactly the same and obviously to look to the guy to the left and look to the guy to the right, and listen to the guy behind me and listen to the guy in front of me. And if anyone has any little manifestation, to try in there in between them to kill it immediately. That’s the only thing I can ask for.”

Mourinho added that the problem extends beyond football: “Society needs help. Then football is a micro society. Do we need help? Yes, but society needs help. We need to eradicate any form of discrimination. And what I fear is that it is going to happen again in the future. That’s the problem.