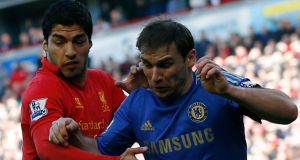 Chelsea defender Branislav Ivanovic says he has forgiven Luis Suarez after being bitten by the Liverpool striker.

Ivanovic was bitten in the arm by Suarez during Chelsea’s 2-2 draw at Anfield in April and the Uruguayan has since been handed a 10-match suspension by the Football Association.

Suarez had apologised to Ivanovic in the immediate aftermath of the incident, which the Serbian admitted took him by surprise.

The 29-year-old is not dwelling on the matter and, in an interview in his homeland, confirmed he does not hold a grudge against Suarez.

“When it happened I was really surprised and, of course, in shock,” Ivanovic told Vecernje Novosti. “But, when the match it ended, it all cooled down. I almost forgot about everything. The next day we talked on the phone and I accepted his apology. I didn’t attack him for what he had done, but I also didn’t defend him.

“But I forgive him. For me that can happen. But I really don’t care too much.”

Suarez last week decided not to appeal against his 10-match ban, but a statement released on his Facebook page pointed to a perceived inconsistency between his punishment and those in “past cases where players have actually been seriously injured”.

But the Uruguay international struck a contrite tone overall, saying: “I hope all the people I have offended will grant me forgiveness and I repeat my personal apology to Branislav. I know all the things happening to me in England will help me improve my conduct on the field.

“I decided to accept the ban because, whilst 10 games is clearly greater than bans given in past cases where players have actually been seriously injured, I acknowledge that my actions were not acceptable. I do not want to give the wrong impression to people by making an appeal.”

Suarez, who was banned for eight games last season for racially abusing Manchester United’s Patrice Evra, will not be seen again in the Premier League until the end of September.

His statement went on: “I really want to learn from what has happened in the last two-and-a-half years. Many things have been said and written about me, I just tried to do my best on the field.”

Liverpool’s managing director Ian Ayre said: “We are all disappointed at the severity of the punishment and in particular the differing standards that have been applied across various previous incidents. Luis is an important member of our team and nothing has changed in that regard. We are committed to helping him improve his conduct and he will be given our full support. We look forward to him returning to the team next season when he is available for selection.”