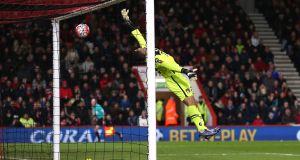 Everton kept their season alive as goals from Ross Barkley and Romelu Lukaku fired them into the FA Cup quarter-finals with a 2-0 win at Bournemouth.

Barkley struck early in the second half with a heavily-deflected strike and Lukaku wrapped up the victory with his 21st goal of the season.

They were also indebted to goalkeeper Joel Robles, who kept out a first-half penalty from Charlie Daniels to keep the sides level at the interval.

Toffees boss Roberto Martinez, under pressure with his side off the pace in the Premier League, knows this competition is his best chance to salvage something from an otherwise disappointing season.

He therefore took the rare step of naming an unchanged side for the fifth-round trip while Bournemouth, whose priority remains top-flight survival, made seven changes.

England boss Roy Hodgson was in attendance, but it was an Argentinian who caught the eye during the first half.

Bournemouth’s January signing Juan Iturbe won possession from Barkley in his own half and embarked on a lightning run to the edge of the area before firing wide.

By contrast Lukaku, on his own in the Everton attack, was cutting a frustrated figure at the lack of service from his team-mates.

So after half an hour he took matters into his own hands by powering past Tommy Elphick down the left like a 400 metre runner going round the final bend.

Having cut in from the wing he bore down on Adam Federici and attempted to tuck the ball inside the near post, but the Cherries goalkeeper stuck out a leg to block the Belgian’s effort.

But Robles made a fine diving save to keep out Daniels’ spot-kick and, in their haste to get to the rebound, four Bournemouth players ran into each other, knocking Simon Francis off balance as he slashed the ball wide.

Everton looked a different side after the interval and made the breakthrough in the 55th minute when Tom Cleverly fed Barkley, who took aim on the edge of the area.

Dan Gosling attempted to block the shot, only to see the ball loop up off his foot and high into the air before dipping under the crossbar just out of the reach of the back-pedalling Federici.

Lukaku thought he had doubled the lead moments later when slotted the ball past Federici after being put through by Barkley, but the striker was flagged for the tightest of offsides.

However, Lukaku got his goal with 14 minutes remaining from Bryan Oviedo’s scuffed near-post corner.

Gareth Barry cleverly helped the ball on with a neat backheel and Lukaku was on hand to fire home from close range and keep Everton in the hunt for silverware this season.