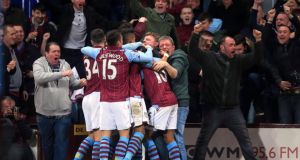 The stand-in skipper scored for the first time since March 2014 as Villa became the first side to bank a last four spot.

Scott Sinclair grabbed a late second after Claudio Yacob was controversially sent off with 10 minutes left and Villa substitute Jack Grealish was also dismissed in stoppage time, picking up a second yellow card for diving.

But the win was marred by ugly scenes which saw seats thrown from the West Brom fans towards the Villa supporters.

Victory completed a dream double over the Baggies after Villa’s 2-1 Barclays Premier League win on Tuesday, which lifted them out of the relegation zone.

Christian Benteke, who scored the late penalty winner on Tuesday, was sidelined with a hip injury as Sinclair replaced him.

Shay Given and Leandro Bacuna also came in while Boaz Myhill replaced Ben Foster in the Baggies goal, after the keeper’s nightmare game in mid-week, and Jonas Olsson started with Darren Fletcher cup-tied.

Given had already saved from Berahino before Villa survived a huge let-off thanks to Brown Ideye’s wayward finishing after eight minutes.

Craig Gardner wriggled behind the hosts’ defence and presented the ball on a plate for Ideye but the unmarked striker could only fire over from eight yards.

It was the best chance of a poor first half which failed to live up to the pre-match hype.

Villa lacked punch and a focal point without Benteke, failing to threaten during a first half where Gabby Agbonlahor struggled to replicate the performance which caused the Baggies problems in mid-week.

There was no fluidity to the hosts’ play, allowing Albion to nullify them with ease.

The visitors continued to be the aggressors and Given claimed Ideye’s header before he turned Brunt’s volley over after the ball had struck Olsson on the shoulder.

The Baggies were on top but Villa emerged for the second half with renewed purpose and took the lead on 51 minutes.

The previously quiet Charles N’Zogbia skipped inside and found the unmarked Delph who was gifted too much time to rifle past Myhill from 16-yards.

It was the midfielder’s first goal since he scored in Villa’s 1-0 win over Chelsea last season.

It was also Villa’s first clear chance but Albion rallied and should have levelled six minutes later only for Joleon Lescott to plant a five-yard header wide.

The goal had given the hosts renewed confidence, though, and Myhill had to rush out and block from Sinclair with 21 minutes left.

And 90 seconds later the winger almost finished the game when he skipped down the left and dragged a shot wide.

Albion were on the ropes and Ashley Westwood’s drive deflected wide before Gardner deflected the ball onto his own bar with 14 minutes left.

It then got worse for the Baggies when Yacob was sent off for a second yellow card.

There seemed little wrong when Bacuna went to tackle the midfielder, who remained on his feet, only for referee Anthony Taylor to issued a second booking for the Albion man.

It left the Baggies fuming and Villa wrapped the game up with five minutes remaining when Grealish broke, found Sinclair and the Manchester City loanee cut inside Brunt and curled into the corner.

Seats were then thrown from the Albion end into the Villa fans.

Grealish was dismissed for a dive in injury time and game was also delayed after a pitch invasion from the home supporters before the final whistle.