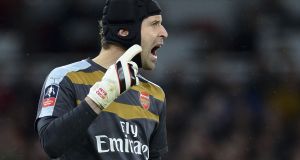 There was a time, not that long ago, when Chelsea’s eyes would light up at the prospect of a collision with Arsenal. This was an occasion to reimpose the recently established order in the capital, when mere mention of Jose Mourinho drew from Arsene Wenger that all too familiar world-weary look as the talk turned to a dismal record against his Portuguese rival.

Yet, now, the suspicion is things may be shifting. Whereas Arsenal go into the weekend top of the table, their sights set firmly on a first title since the Invincibles held sway pre-Mourinho, Chelsea are only pigeon-stepping away from the relegation zone.

Mourinho, the icon who could shrink Arsenal with a smirk and has never lost to Wenger outside the Community Shield, has been sacked, airbrushed from history after all that “palpable discord”.

Wenger’s players may never have a better opportunity to redress some of the balance than when the teams trot out at the Emirates Stadium tomorrow.

“Are we direct rivals? Not at this moment. Not in this league,” offered Guus Hiddink, this season’s chosen firefighter. “Arsenal are making a good battle for first position. We are way down under. That’s the reality.”

Chelsea have arguably become a case study in how not to capitalise upon a title-winning success. In years to come, championship winners will spend pre-season reminding the world what befell Mourinho and the team who finished eight points clear in 2015.

In terms of recruitment alone, it is kind to dismiss their policy since they paraded the trophy as confused. Mourinho, perhaps unconvinced by the talent at the Cobham academy, had wanted to build on success with eye-catching signings.

Instead they replaced like for like and, as if panicked by a stodgy start, moved to bring in Pedro and Papy Djilobodji as the deadline loomed. The former has offered only flashes of Barcelona quality, and there are noises that he will return to Spain in the summer, at Valencia or Villarreal, and they do not sound outlandish, while Djilobodji is winging his way to Werder Bremen on loan after just one minute and one touch of the ball in a first-team shirt.

Yet, when Roman Abramovich rewarded the Czech for long-standing service by sanctioning his move across the city, it was the message the transfer sent that was truly shocking.

Arsenal were direct rivals, fellow contenders for silverware, and here was their achilles heel not quite being dipped in the Styx. Mourinho knew as much. Wenger, after some initial concerns, was quickly heartened.

“I didn’t know what kind of shape he was in physically because he hadn’t played,” said the Frenchman. “I didn’t know how much he could still produce. But when I met him I was quickly reassured of his desire to do well and his motivation. I knew the potential was exceptional having played against him for 11 years in the Premier League.

“Look, it was a very, very difficult decision for me because I rate highly David Ospina, a keeper who, in my opinion, is underrated, especially in England. But [signing Cech] was maybe one of the few opportunities to say: ‘OK, this is an obvious [transfer]. If I don’t do this, it would be a mistake.’”

Cech had been one of those key senior players in Hiddink’s Chelsea team over that first spell as interim manager in 2009, and a figure whose qualities remain. No other goalkeeper boasts more than his 10 clean sheets in the Premier League this season. John Terry suggested Cech might be worth 15 points to any suitor.

“You cannot measure that, but you know one thing: you need a top-class goalkeeper to do well,” said Wenger. “He has a calming presence, he communicates well, anticipates well, sees what is coming. He is a kind of coach because he doesn’t move, and he sees everything. He is the camera behind the team.”

“We had a chat,” said Hiddink. “It was nice to see him. It’s easy to make a judgment a year on from that decision, and when is the moment to say goodbye to a player?

“But you have to acknowledge Petr reacted well with his performances. He’s one of those goalies who is so determined, ambitious, so detailed in his preparations. You have certain periods in a season, mostly in October and November when the leaves start falling, when the good goalies save points for your team. He is doing that.”

For all that Courtois’ qualities are obvious, Chelsea must still gnash at the reality that Cech finds himself now in a position to emulate Eric Cantona by securing back-to-back titles with different clubs.

They will travel in trepidation tomorrow, aware that their seven-match unbeaten run since Mourinho’s departure has bought them only four points’ breathing space from the bottom three.

T there is only scant consolation to be had in the fact that Hiddink inflicted Arsenal’s worst defeat at the Emirates Stadium, a 4-1 Chelsea win in May 2009.

“This club is used to being at the top, or in the top three or four, in England,” the Dutchman said.

“Winning a game like this might bring confidence to the team to ask: ‘Hey, where do we belong?’ And make them think about why this team has fallen so deeply in the recent period.”

For the first time in a while, it would also constitute a surprise. Guardian service