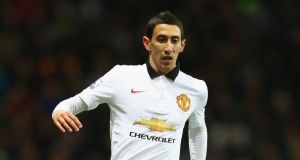 Manchester United will await tests on winger Angel Di Maria to see if he has a chance of facing Tottenham Hotspur on Sunday after the Argentine suffered a pelvic injury in training.

Record signing Di Maria was injured on Wednesday and ruled out of Friday’s 3-1 home victory over Newcastle United in the Premier League.

He had only just returned from a hamstring injury and played in the 1-1 draw against Aston Villa last week.

“In the last training session he (Di Maria) stepped out of the warm up,” manager Louis van Gaal said.

“It was a little bit amazing because he did everything very well but ... now we have to wait and see for the analysis.

“The pelvis is not in a right relationship with his leg. I don’t think (it’s serious), but I am not a doctor.”

There was better news on United’s other injured players, including Belgian midfielders Adnan Januzaj and Marouane Fellaini, as well as Marcos Rojo and Daley Blind.

“All the injuries are coming back,” Van Gaal said.

“It is a little bit late for us because now we have to play a lot of games within one week but they are coming back and, within two weeks, I think a lot of players will be back.

“Januzaj is ill. A virus has approached a lot of players but for him it was too much. Also Fellaini ... I think it is the Belgium virus!