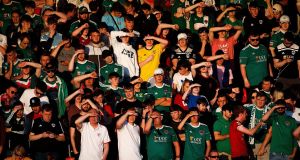 Cork City have it all do to heading into the second leg of this tie against Progrès Niederkorn.

The men from Luxembourg will take a two goal advantage on a night which saw Cork fall flat. With City in transition, the fear is this could be the last European tie in Turners Cross for a few years.

Cork, who went into this game without a win in seven games in all competitions, went with the same starting eleven as in their draw with Bohemians.

Although City started this one brightly, it was the visitors that went into the lead on the 10 minute mark. Belmin Muratovic arrived menacingly and he punished some hesitant City defending from Colm Horgan, before finishing with a low effort beyond the reach of Mark McNulty.

Things got worse for the Leesiders, when Progrès were awarded a penalty kick. Mayron De Almeida stepped up and duly converted with a well taken effort.

Cork were given the perfect chance to get back into the match when they were awarded a penalty of their own. Karl Sheppard struck his effort down the middle, but it was saved by the legs of visiting keeper Sebastian Flauss.

The hosts tried their best to muster a response before the half time break, with Gearóid Morrissey seeing his long ranged effort from distance saved.

Early in the second half a cross from Mark O’Sullivan almost found the head of Sheppard. But generally things were quite flat and the visitors seemed content to hang on to what they had.

Still, Progrès threatened to add to their advantage, when Tom Laterza let fly from outside the box, while De Almeida saw his effort from a free kick saved by McNulty.

City saw plenty of the ball in second half but created little in truth. As their limited attacking options once again came to the fore for Cork this term.

The game from their perspective played out to a flat conclusion. Heading into the second leg although not totally over, it seems like a very high mountain for Cork to climb.

1 Six Nations: No place to hide for Ireland’s misfiring captain
2 Ireland left in championship dogfight after being bullied by England again
3 England 24 Ireland 12: How the Irish players rated at Twickenham
4 Liam Toland: Astute kicking game helps England establish a stranglehold
5 Ken Early: Guardiola eyeing what could be a last chance for European glory with City
Real news has value SUBSCRIBE
Crossword Get access to over 6,000 interactive crosswords