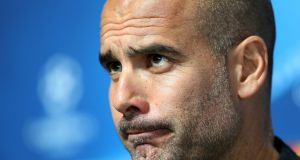 The manager of the Premier League leaders made the statement despite Saturday’s 2-1 derby defeat of Manchester United, which gave City a fourth win from four league outings and which makes them the only side with a 100 per cent record.

Guardiola’s team have registered 17 goals in all competitions and were without main striker Sergio Agüero for Saturday’s victory in the 172nd derby.

Agüero is available for City’s clash with Borussia Monchengladbach tonight as his domestic suspension does not apply to the Champions League group stage opener, but Guardiola said: “To take it to the next level we have to improve a lot of things. Now, after four games in the Premier League, I would like to tell our fans that the way we have played up until now will not be good enough to win the title.

“He [Bravo] is so strong. I saw the game [again] to see which things we made good and which things we have to improve. I saw the goal and after that he showed huge personality,” the Catalan said. “That is what I try to say after the game. I am going to tell you something. Claudio Bravo and Willy Caballero – they are going to make mistakes in the future and they are not going to save all the goals and opponents are going to score goals. I am pretty sure of that.”

Raheem Sterling is also clear that some of the negativity he received during last term’s uneven campaign was undeserved. “I got a lot of criticism last year which I thought was a bit unfair,” the 21-year-old said. “There were a few games where I made my mark in the Champions League, where I had never scored. I equalled my best scoring season, with 11.

“Pep coming in was a massive help and him ringing me was a massive boost. He said he always liked my football and that helped me come back a lot stronger.”

Guardiola’s appointment has brought high hopes City can achieve great things in the Champions League with the 45-year-old having reached the semi-final stage in the last seven seasons with either Barcelona or Bayern Munich.

On two of those occasions, both at Barcelona, he went on to win the trophy but he points out he is not a miracle worker. Last season’s run to the last four was Manchester City’s best effort in only five previous attempts.

Guardiola has now turned his attention to the Champions League and the visit of Monchengladbach. In a group which includes favourites Barcelona, City are keen to get off to a good start. “They are a brave team, brave coach – one of the best teams in Europe. They have a lot of quality. The draw was difficult for us.” Guardian Service