Borussia Mönchengladbach game to kick off at 7.45pm 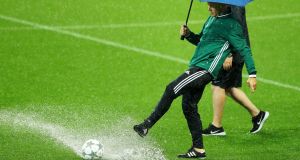 Referee Bjorn Kuipers kicks a ball on the waterlogged pitch at the Etihad Stadium before the Champions League game between Manchester City and Borussia Mönchengladbach was abandoned. Photograph: Richard Heathcote/Getty Images

A torrential thunderstorm saturated the pitch at the Etihad Stadium in the two hours before the scheduled kick-off and made the surrounding areas dangerous. The postponement came just 20 minutes before the match had been due to start and was met by boos from the 1500 travelling fans.

It is understood the decision was taken because of safety concerns around the ground rather than the pitch being unplayable. Uefa officials were due to reach a decision over when the match could be rescheduled within two hours of the postponement, but that was delayed after issues emerged with supplying enough stewards. Gladbach had initially urged the game to go ahead with an earlier kick-off, although they later agreed to wait until the standard 7.45pm kick-off time.

“We asked Uefa and Manchester City play at 6pm because for sporting reasons we wanted to fly back to Germany,” the club spokesman Markus Aretz said. “That was important for us, but City could not make that possible. I don’t know the reasons why, they said we had to play at 7.45 like today. So Uefa had to make the decision to play at 7.45. We are not happy with that, but we have to take it like it is. City offered us to spend the next night in the academy. That was no help because a hotel was not a problem. I think it is always a disadvantage when you have to stay one day longer than planned. I think for the away team it is a disadvantage, without fans.”

The Gladbach defender Oscar Wendt said: “It’s hard for us because we prepared for this match, but it’s harder for our supporters because they had a long journey here and bought their tickets.”

From late on Tuesday afternoon thunderstorms engulfed the Etihad Stadium to a degree that caused large puddles to form on the surface. As kick-off neared Bjorn Kuipers, the match referee, led a Uefa delegation plus City’s head groundsman, Lee Jackson, who inspected the playing area. This included the bouncing of a ball into the worst areas which resulted in it sticking in the water.

Around 40 minutes later the match was called off despite the surface having drained well and the conditions improving.

“Around 90% of our supports have to leave tomorrow so they can’t see the game,” Wendt said. “It’s not our decision, we don’t have any influence, so we have to take this decision.”