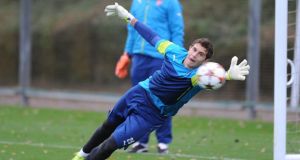 Emiliano Martinez might need to pinch himself at the Constant Vanden Stock Stadium here in Belgium tonight and the travelling Arsenal supporters will surely do so. This time last year, the club’s third-choice goalkeeper had just been loaned to Sheffield Wednesday in the Championship but now here he is, primed to make his Champions League debut in the vital Group D tie against Anderlecht.

It will be Martinez’s third appearance for Arsenal, and it is almost two years since the last one – the chaotic 7-5 League Cup win at Reading, when the 22-year-old was, it must be said, nervous and error-strewn. His debut had come in the previous round of that season’s competition, in the 6-1 home victory over Coventry City.

Martinez’s elevation owes itself to some poor judgment and even poorer luck – the sort that seems to bedevil Arsenal more than most clubs. Wojciech Szczesny’s sending off against Galatasaray in the previous round of Champions League fixtures, as Arsenal led 4-0, seemed needless in the extreme and the first-choice goalkeeper’s suspension has been compounded by the ongoing injury issues of the back-up David Ospina. Indeed, Szczesny’s sending-off played a major role in Ospina re-aggravating his thigh problem which, Arsene Wenger revealed, will rule him out for between two and three months.

“I had to bring Ospina on against Galatasaray without warm-up, without being prepared, and he had a recurrence of that injury,” the manager said. “That means he is out for two to three months. Now, we have to be really careful because he has a recurrence of a thigh injury that’s very difficult.”

This seems like a classic Arsenal subplot. Wenger has always believed in Martinez and he has been working for years to turn him from rough diamond into polished gem. The circumstances might have been freakish, if not entirely shocking, but Wenger says he has no hesitation about plunging As an aside, the 17-year-old academy goalkeeper, Ryan Huddart, will be on the bench.

Wenger continues to put a nice spin on what has so far been a disappointing season. Twelve months ago, Arsenal were top of the Premier League after six wins and two draws. Now, they trail Chelsea by 11 points. They have won only four of 13 matches in all competitions. And yet the manager remains convinced that the performances have largely been up to scratch and the results have mysteriously failed to keep pace.

Arsenal need one against Anderlecht, the Belgian champions, who themselves have injury problems, particularly at the back.

Wenger has Mikel Arteta back to fitness and a landmark to celebrate. Today is his 65th birthday.