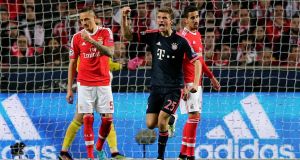 Arturo Vidal’s thunderbolt and Thomas Muller’s tap-in comfortably put Bayern Munich through to the Champions League semi-finals for the fifth successive season, this time with a 3-2 aggregate win over Benfica.

Vidal, who last week headed the only goal of the first leg, powerfully volleyed home from the edge of the area 11 first-half minutes after Raul Jimenez bravely nodded the tie level.

Seven minutes after the break Muller steered in a nod-down from a corner, giving the 2013 Champions League winners a second away goal which proved far too much for manager Rui Vitoria’s side to claw back. Substitute Anderson Talisca’s free-kick gave the hosts hope, but it was too little too late as the game finished 2-2.

The result at the Stadium of Light could see Bayern boss Pep Guardiola face Manchester City, the club he will manage from the summer, in the last four. Guardiola will not meet former team Barcelona after the holders were knocked out by Atletico Madrid.

Benfica were hindered by missing the suspended Jonas, who has scored 32 goals this season, midfielder Nicolas Gaitan with a muscular problem and striker Kostas Mitroglou also to injury.

The Bavarians threatened most in the early stages, but Thomas Muller was unable to convert an early chance when under pressure.

Yet Benfica levelled the tie in the 27th minute when Jimenez, expecting to be clattered by Manuel Neuer, showed great bravery to head in Pereira Eliseu’s enticing ball from the inside left. As it was, Neuer got nowhere near the ball or striker.

Jimenez could have had a second three minutes later but his shot from centre of the area was straight at Neuer.

That miss looked costly when Bayern equalised on the night in the 37th minute. Santana Ederson could only palm away Philip Lahm’s right-sided cross to the edge of the area, from where Vidal emphatically smashed into the left of the gaping net.

Muller snuffed out Benfica hopes in the 52nd minute after Javi Martinez headed Xabi Alonso’s left-sided corner across goal as the hosts paid for trying to play for offside.

Douglas Costa squandered a fine chance to put the outcome beyond doubt, his heavy touch allowing Ederson to steal in, before Costa hit the post with a low shot on the hour.

Martinez was lucky to be shown just a yellow card when he brought down substitute Goncalo Guedes on the edge of the area. Talisca curled the resulting free-kick into the near top-left corner. Vitoria, having been sent to the stand, was mobbed by home fans as Benfica sensed an unlikely comeback.

With six minutes to go Talisca went close from a similar position, but this time his free-kick went past the right post.

Neuer was equal to a late effort from Luka Jovic, another substitute.

1 Dustin Johnson leads US PGA after Saturday charge
2 Bayern Munich complete formalities with rout over Chelsea
3 Rory McIlroy puts integrity ahead of glory in US PGA second round
4 Lionel Messi waves his magic wand again to guide Barça past Napoli
5 Sporting Cathedrals: Cheltenham reveals all about the wonder of racing
Real news has value SUBSCRIBE