Barcelona running out of defenders 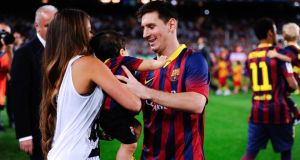 Barcelona face a defensive crisis ahead of next week’s Champions League trip to Celtic after Javier Mascherano was ruled out for “10 to 15 days” with a hamstring injury.

The Argentina international suffered the problem in last night’s 4-1 win over Real Sociedad and joins fellow defender Jordi Alba on the sidelines.

Alba was also diagnosed with a hamstring tear earlier this month to leave Barca without two first-choice defenders, while Carles Puyol is still making his way back from a knee problem.

The Catalans are therefore set to be stretched at the back ahead of next Tuesday’s tie in Glasgow — where they were memorably beaten by Celtic last season.

“Javier Mascherano underwent medical tests this morning to determine the extent of the injury suffered in last night’s league match at home to Real Sociedad,” a Barcelona statement read.

“It has been confirmed that he has strained his right hamstring and will therefore be sidelined for 10 to 15 days.

“If the club medical services are correct with their forecast, then Mascherano will miss the league matches against Almeria (September 28th) and Valladolid (October 5th), and the Champions League clash with Glasgow Celtic (October 1st).

“These are Barca’s last three games before the international break. There will be no more games after that until the trip to Pamplona to play Osasuna on October 19th.”

Meanwhile, Lionel Messi has rejected suggestions he made a disrespectful gesture towards Barcelona coach Gerardo Martino after being substituted in last night’s win.

The talismanic forward continued his blistering form, taking his tally to 10 goals in all competitions this season with a diving header in the eighth minute.

Messi also added an assist for Barca’s fourth goal before being hauled off nine minutes from the end in place of Sergi Roberto.

The Argentinian admitted he was unhappy at his substitution, but refutes media suggestions that he deliberately snubbed Martino whilst being withdrawn.

“I didn’t mean to make any gesture when Martino took me off,” Messi said on his official Facebook page.

“Nobody likes to be out, but we must accept it because it is the best for our team. What I will not accept is that certain media tell lies about any situation that happens around me.”

New man Marshall sees Shamrock Rovers past Waterford 21:39
City Island to return to hurdles and take on Paisley Park in stayers’ 20:50
McIlroy takes his foot off the pedal and will skip the Honda Classic 20:01
GPA asks delegates to vote against hurling black card at congress 18:33
Dan Tuohy explains ‘rotten to the core’ comments 18:08