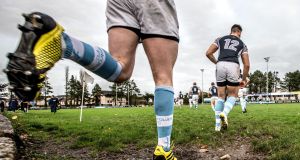 UCD came from behind against Garryowen in Limerick. Photograph: Inpho

UCD may have been in free-scoring form of late in Ulster Bank League Division 1A, but they showed their ability to win a tight contest when coming from behind to defeat Garryowen 13-6 at Dooradoyle.

Noel McNamara’s students moved to the top of the table, taking advantage of Clontarf’s draw with Lansdowne, as second half tries from hooker Sean McNulty and scrum half Jamie Glynn proved crucial in Limerick.

UCD were unable to take advantage of a strong first half wind, with two penalties from Neil Cronin giving Garryowen a 6-3 half-time buffer. Leinster’s Ross Byrne sandwiched in a place-kick for the visitors, and early pressure on the restart saw hooker McNulty pile over from a rolling maul.

Glynn, a former Garryowen player and one steeped in the history of the Limerick club with his father Liam and grandfather both being heavily involved, sealed the result for College with a 79th minute unconverted score.

At Crowley Park, Connacht squad member Shane O’Leary made the most of his late inclusion in the Galwegians team as his 18-point haul, including a try, helped them beat bottom side Ballynahinch 33-16.

Lansdowne captain Scott Deasy converted Joe O’Brien’s late try to secure a 23-all draw with previous Division 1A table toppers Clontarf in a super-charged clash at the Aviva Stadium. ‘Tarf will be kicking themselves as a lapse in discipline saw their Leinster hooker Aaron Dundon sent-off and lock Tom Byrne sin-binned, with the 13 men - defending a 23-16 lead - unable to prevent Lansdowne flanker O’Brien from going over.

Shannon are up to fifth in Division 1B after coming from behind to beat Munster rivals Dolphin 30-19 in difficult weather conditions at Coonagh. A penalty try, and a late effort from converted scrum half David O’Donovan, sealed the bonus point triumph.

Martin Irwin and Rodger McBurney kicked two brilliant drop goals as second-placed Ballymena battled their way to a 15-6 victory over UL Bohemians in a game that was played in miserable weather conditions.

Five-try Blackrock College survived a second half fightback from bottom side Belfast Harlequins, winning out on a 36-32 scoreline at rain-soaked Stradbrook. Forwards Mikey Carroll, Conor Kilcoyne and Joe Scott-Lennon were among their try scorers.

The Dublin University juggernaut rolled on at Dubarry Park where they finished strongly to pocket a 27-6 bonus point win over disappointing hosts Buccaneers and climb into third place. USA international Tim Maupin scored his third try in two games and Angus Lloyd, Killian O’Leary and Tom Ryan also dotted down.

Leinster winger Darragh Fanning grabbed the only try of the game - his fifth of the campaign - as St. Mary’s College stayed top of Division 1B with a solid 19-9 triumph over Old Wesley at Templeville Road.