Ulster pay the price against Zebre 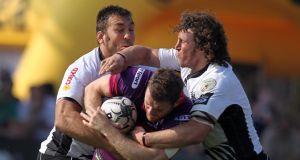 It was a double-whammy really as Ulster tasted defeat for the first time this season, bringing to an end their three game unbeaten run, while the result also ensured they fell to Zebre for a first occasion as well.

In the end, their cause was undone by the red card shown to Declan Fitzpatrick in the 10th minute after he had thrown a punch at hooker Andrea Mancini and the fact that the 10 changes they had made to their starting side; both proved too much for them to overcome. Italian TMO Carlo Damasco also played his part and though he could hardly be faulted for the Fitzpatrick call — even if the Ireland prop was provoked — his decision to deny a late try from Darren Cave for an apparent block by Tommy Bowe did look harsh to say the least.

Still, Ulster were well off the mark and Zebre’s victory — their first this season after three heavy defeats including one in Belfast — was just about deserved in what was a dire game (it stood at 0-0 at the break) played in perfect conditions.

The opening 40 minutes was about as grim as the 0-0 scoreline suggested and clearly Fitzpatrick’s sending off had a significant impact on Ulster’s game-plan, necessitating the early arrival of Wiehahn Herbst and the removal of Clive Ross — Ireland international Mike’s cousin — from the flank on his first appearance.

With both sides making a hatful of errors, it was the visitors who came closest to crossing the whitewash with Michael Allen’s 13th minute break nearly putting the impressive Stuart McCloskey over only for possession to be ultimately knocked on.

Paddy Jackson also had little luck with one long range drop goal attempt falling well short and then his rather hopeful penalty from halfway also off target. And when Zebre had the clearest cut chance to make some inroads on the scoreboard it was similarly abortive as Edoardo Padovani’s 35th minute penalty also failed to bisect the uprights.

After a scoreless first half, Zebre showed their intent from the off after the break but on two quick occasions when Leonardo Sarto had actually crossed the Ulster line he was denied by the TMO with a foot in touch and Rob Herring’s arm preventing the five points on both occasions.

It was a massive reprieve for Ulster but from the five-metre scrum, prop Dario Chistolini who got over in the left corner and Kelly Haimona hit a marvellous conversion after the TMO had allowed the try.

Ulster had to respond and Ian Humphreys — on for the injured Jackson — then slotted two penalties to reduce the deficit to a solitary point after 53 minutes. But another scrum in reverse gear saw Haimona landed the penalty to give the home side a four point lead with 13 minutes left on the clock.

Andrew Trimble then won a turnover from the restart and Ulster were over the line through Cave only for the TMO to controversially rule it out and then rightly give Haimona’s 72nd minute drop goal to leave Ulster with just a losing bonus despite their last-ditch attacking.

1 Health official says decision to hold Liverpool-Atlético game was wrong
2 Son Heung-min to carry out mandatory national service in South Korea
3 Avoid the treadmill at all costs – marathon training in the 2km radius
4 Only a matter of time before British Open bites the dust
5 Sonia O’Sullivan: Taming The Tan gave us one last roll of the dice before shutdown
Real news has value SUBSCRIBE