Ulster hold firm in the wind to see off Connacht 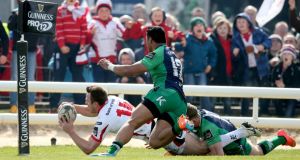 Tommy Bowe goes over for his first of two scores during Ulster’s 27-20 win over Connacht at the Sportsground. Photograph: Inpho

In a game of seven tries, Ulster took the spoils to maintain their push for the Guinness Pro 12 title, while Connacht had to content themselves with a losing bonus point.

In conditions that ranged from summer to winter, Neil Doak’s Ulster were deserving winners, posting five tries, while the home side, looking for their first cleansweep over the Irish provinces at the Sportsground, fought back from 17-0 down at half time to come within a score.

Ulster were off the mark after 14 minutes with Jared Payne and Craig Gilroy combining to break through the midfield, setting up field position, before fullback Loius Ludik crossed in the corner.

Pienaar missed the conversion and a subsequent penalty before Connacht were able to gain a foothold in the contest. Denied what would have been a cheeky try by Bundee Aki, Connacht gained some territorial control, but struggled to penetrate the organised Ulster outfit who were able to prevent Connacht gaining any momentum.

Ulster regained the initiative through a superb break from Darren Cave and within three minutes they had turned the contest on its head with two tries.

Right wing Tommy Bowe grabbed the second after Connacht’s Aki lost possession breaking out of defence, and Ulster quickly capitalised, sending the ball out wide with Bowe finishing in the right corner.

Pienaar’s kick once again hit the upright, but he was on target with his third conversion after Gilroy strolled through on 34 minutes for the third try, capitalising on an overlap to establish a 17-0 half time lead.

However the home side made a cracking start to the second half, finally turning possession into points. Within four minutes key line-breaker Matt Healy spun out of two tackles before racing in from the 22 for the home side’s first try, which outhalf Miah Nikora converted, and when Connacht sent Ulster’s scrum reeling, Nikora slotted the 40m penalty to close the gap to 10-17.

Bowe struck a critical blow with another trademark try in the corner after 57m to give the title chasers a fourth try bonus point, and although replacement outhalf Jack Carty posted a 58th minute penalty for Connacht, Ulster captain Rory Best scored from a drive following a penalty to touch.

Once again Connacht replied when Tiernan O’Halloran crossed in the left corner on 70 minutes, and the touchline conversion from Carty once again brought the home side within a score and what could be a crucial bonus point in their bid to maintain their sixth place qualification.