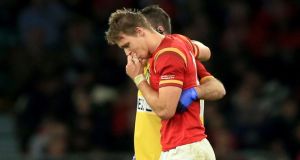 Wales’ Liam Williams has been ruled out of the Rugby World Cup with a foot injury he picked up in the game against Australia at Twickenham. Photograph: Mike Egerton/PA

Wales have suffered another Rugby World Cup injury blow with wing Liam Williams being ruled out of the tournament remainder with a foot injury.

The Scarlets player limped off during the second half of Wales’ 15-6 Pool A defeat against Australia at Twickenham on Saturday.

And the Welsh Rugby Union tweeted on Sunday: “Disappointing news out of camp this morning. Liam Williams ruled out of RWC with foot injury.”

Williams, who can also play at fullback, battled to overcome a foot injury during World Cup preparations in the summer, but he gained a place in head coach Warren Gatland’s 31-man squad.

He was then concussed during the 28-25 pool win against England a fortnight ago, missing the Fiji game five days later, before returning to action when Wales took on the Wallabies.

And his loss is a particular blow heading towards next weekend’s quarter-final clash against twice world champions South Africa.

Wales appear to be thin on the ground in terms of wing cover, and it now appears likely that George North will return to the wing against South Africa after starting at outside centre in the Wallabies game.

That would then leave Gatland needing to make a decision on Jamie Roberts’s midfield partner, with Tyler Morgan and James Hook his likely options.

Wales, despite being hit by repeated injury setbacks, emerged from the World Cup’s so-called ‘pool of death’ in second place behind Australia.