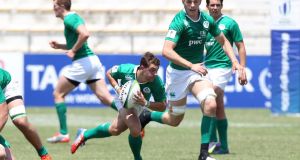 Ireland under-20 scrumhalf Charlie Rock makes a break during the seventh place play-off against Scotland at the World Rugby under-20 Championships at Zaffanella Stadium in Viadana. Photo: Giuseppe Fama/Inpho

Ireland under-20 coach Nigel Carolan says he expects many of this squad to go on and earn full caps in the years ahead and believes the value of playing in a tournament like this is a big stepping stone in the process.

Ireland secured seventh place with their third win in five games at the World Rugby U20 Championship, when they always had an edge against a Scottish side who defeated them in the Six Nations but who they beat in the pool stages of this competition.

“It is a very good competition and a key stage in a player’s development. We were pleased to finish with a win, we were very disappointed with the manner of the Welsh defeat but I was very proud of the way they reacted to that game and put together a winning performance in the final match.

“I think a lot of these lads will go on to earn full caps and I think they will have learned a lot from participating in this sort of tournament,” said Carolan.

Whether many of them go on to play international rugby remains to be seen but they were given the chance to showcase their ability in front of Joe Schmidt, Les Kiss and Simon Easterby, who attended the match before making a dash to the airport and on to the Tbilisi Cup and Ireland’s final match in that tournament.

Winger Stephen Fitzgerald was the key figure in this Irish win, touching down for tries early and late to kill off the spirited challenge of a younger Scottish side.

Fitzgerald’s first try after seven minutes, which came when a chip from outhalf Joey Carbery bounced kindly for him, helped Ireland lead 7-6 at the break.

Carbery added the difficult conversion from the left touchline to Fitzgerald’s opening try but Scotland kept in touch with a couple of penalties from Blair Kinghorn.

Garry Ringrose, with another promising performance, took over the kicking duties after Carbery went off injured, and he landed a penalty after 50 minutes to extend the lead.

Oisin Heffernan became only the third Irish player – Dominic Ryan and Iain Henderson were the others – to win 20 under-20 caps when he was introduced, a notable achievement for the tighthead from Clifden in Co Galway who featured in all Six Nations and World Championship games this year and last season.

Scotland never gave up but while they enjoyed sustained bouts of pressure they were unable to break down a resolute Irish defence who kept their line intact despite all the pressure.

George Horne, brother of Scottish international Peter, reduced the margin to a point 10 minutes from the end with a good penalty from 40 metres.

However, Ireland closed out the game and a sustained barrage on the Scottish line did enough to create space and let it out to the backs where Fitzgerald cut a great line coming in off his wing to score under the posts after an inside pass from Fergal Cleary

Ringrose tapped over the conversion to put nine between them and make the game safe.