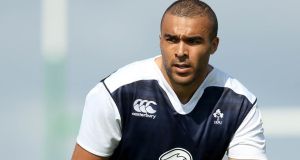 Excluding the natural skills of Simon Zebo from Ireland’s World Cup squad would shock. Not unlike Declan Kidney cutting Luke Fitzgerald in 2011, when Fergus McFadden travelled instead.

But it’s not beyond the realms of possibility that one of those three won’t make it. Precedence exists for only three wingers making the 31- man panel. Gordon D’Arcy was the fourth choice winger in 2003 and missed the plane to Australia. It happens.

Based on the Six Nations, Zebo is currently third choice. But Andrew Trimble, 2014 player of the season, is fit again. Felix Jones is Joe Schmidt’s preferred option when handing out jersey number 23. McFadden used to be. Craig Gilroy and Dave Kearney are still there.

As of now, all the above are fit and able. Zebo’s knee cap popped out and in during training last week.

“It’s all good,” he told reporters at the Adidas Munster jersey launch yesterday. “The scans showed up clear, just a little bit of damage, but nothing to keep me out for too long. It’s fine. I took a few days’ rest. I had to take a few meds and put up the leg, but I feel fresh now again. We were doing speed training and things like that and I was moving quite well.”

Speed is what gets Zebo on the plane. That and his ability as a fullback.

“I think they know I can do a job at fullback at this stage,” said the 25-year-old.

“Don’t think I really need to plead my case. I played internationally at fullback, played for Munster at fullback. I probably prefer playing there as I get more ball. Played there in the Heineken Cup against Sale and got man of the match. I love playing there.”

This season saw him play an uninterrupted run of games for Ireland after making 10 tackles in the win over the Wallabies last November.

But when Zebo’s form noticeably dipped in defeat to Wales, Schmidt turned to Fitzgerald for the Six Nations decider in Edinburgh.

“Obviously you want to be involved in the last game. I had played the last nine tests and it was probably my first season when I had been able to play throughout the whole season without either breaking both my feet or coming up with injury.

“As [Schmidt] said, I was showing a little bit of wear and tear. I can understand that. I wouldn’t have been as sharp in the Wales game as I would have liked to be . . .

“I feel really fresh now, excited and hopefully my best rugby will come out . . .

“It will just come down to form I think . . . Obviously there is going to be class international standard players who are not going to travel.

1 Gerry Thornley: Wild reactions to this Ireland team as fickle as the wind
2 Guardiola’s City legacy hinges on Europe as he faces old foe
3 England and Eddie Jones at the vanguard of rugby’s hybrid era
4 Cian Healy out of remainder of Six Nations
5 Munster were fever-tested when they arrived in Italy
Real news has value SUBSCRIBE