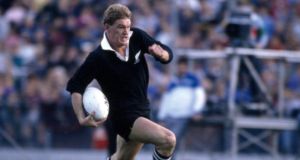 John Kirwan scored a stunning solo try in the first ever match at the Rugby World Cup. Photograph: Getty

In any sport it tends to be the biggest tournaments which provide the most highlight-reel moments. Better goals or tries may be scored domestically every week, but it’s the ones which are scored with the eyes of the world watching which live longest in the memory.

The Rugby World Cup has been the stage for some of rugby’s most memorable tries, and it is fitting one of the best came in the tournament’s first ever game.

The All Blacks against Italy, on a Friday afternoon at Eden Park on the opening day of the 1987 World Cup, was a mismatch in every sense of the word. And it proved to be so, the hosts running out 70-6 winners.

But while this was an uneven contest there was a moment of magic so impressive the quality of opposition doesn’t take away from its enduring brilliance.

From an Italian restart, of which there were many, New Zealand captain David Kirk collected the ball and fed outhalf Grant Fox, who passed to John Kirwan, running onto the ball under the shadow of his own posts.

And then Kirwan begins to fly.

He steps and weaves and slaloms, brushing would be tacklers off with nonchalant ease and leaving blue jerseys flapping at his ankles in vain.

With the ball lodged firmly under one arm he emerges from a thicket of blue in the middle of the pitch and into open space, having the pace to hold off winger Marcello Cuttitta, the only one who could stay in touch, and crashes over the line having carried for 70 metres.

The Rugby World Cup best tries compilation had its first entry after just one match.