Powerful pack may give Blackrock the edge over St Michael’s 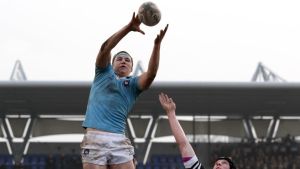 St Michael’s captain Ross Molony in action against Newbridge College in the semi-final and below, Ross Byrne. Photograph: Ryan Byrne/Inpho

Let’s dispel a myth that has grown up around this rivalry for the old boys blowing back in for the final. St Michael’s College are not the also-rans of your youth, they have become a fully fledged powerhouse of Leinster schools rugby.

All the pre-game talk of Blackrock’s 66 titles, to St Michael’s mere two, is irrelevant. St Michael’s can lay partial claim to many of Blackrock’s successes having funnelled so much talent up the food chain until they became a fully independent school in 1970.

In fact, since losing the 2006 final to Luke Fitzgerald ’s Blackrock, they have become the dominant force in the province, last year backing up their first ever title success in 2007.

St Michael’s have also addressed a recent reputation for losing finals. On their sixth consecutive appearance in the junior decider last season, James Ryan led them to glory while the seniors denied Clongowes the three in a row.

This first double made a reality of concerns long held down the Rock road: that the former junior school would carve out a patch of their own. It ensures that today signifies the most important chapter of this old rivalry.

St Michael’s, captained by Ross Molony – whose father Kevin captained them to a semi-final in 1978 – make the short journey to the RDS with a combination of last year’s successful junior and senior squads; a well-oiled machine with quality in every position.

Awaiting them are Charlie Rock ’s Blackrock, a squad littered with under-17 players – six in the starting line-up – and runaway favourites to win the competition in 2014,

The main priority is to end a four-year drought since Jordi Murphy ’s team last brought the cup back to Williamstown.

There are a dozen teenagers capable of deciding the result. The most likely candidates are Nick Timoney, Rock’s brilliant No 8, and St Michael’s outhalf Ross Byrne.

Both are part of the 10 players, five from each school, due to link up with the Ireland under-18s for a Fira European championship in Grenoble tomorrow.

For certain, 2013 has produced a vintage crop. Be it Gonzaga outhalf Conor McKeon to Roscrea’s Sean O’Brien to Terenure duo Harrison Brewer and Billy Dardis, the spread of talent across the competition has been higher than normal.

It also helps that Leinster number eight Sean Coughlan, successfully switched to the wing by coach Peter Smyth, will have served his suspension for a tip tackle in the epic semi-final defeat of Roscrea, when 14-man Blackrock came back from a 20-9 deficit.

Coughlan is a hugely damaging ball carrier. Centre pairing Steve Lawton and Gary Ringrose must also be highlighted as Lawton leads the defensive line while Ringrose has missed only one kick at goal in three cup games.

Either fullback, Jack Power or St Michael’s Cian Kelleher, can tear up defences. If Michael’s are to retain the title it will be down to their lineout, a highly skilled offloading game and Byrne. Also watch out for 6ft6in under-16 lock James Ryan, an unreal talent.

1 Sonia O’Sullivan: Taming The Tan gave us one last roll of the dice before shutdown
2 Avoid the treadmill at all costs – marathon training in the 2km radius
3 Premier League stress to PFA that players need to take pay cuts
4 America at Large: On Long Island, longing for a return to our field of dreams
5 ‘NRL Island’ being considered in Australia to continue season
Real news has value SUBSCRIBE