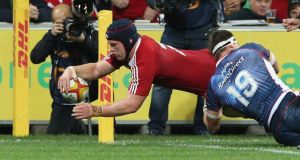 Sean O’Brien of the Lions dives over for his try against the Melbourne Rebels. Photograph: David Rogers/Getty Images

Melbourne Rebels 0 British and Irish Lions 35: The dirt-trackers, re-enforced by the test bench, duly atoned for last week’s blip in Canberra against the Brumbies by putting a willing but limited Rebels team in their place with a relatively routine five tries to nil win.

On a clear, crisp night under a full moon in Melbourne, there was little madness in the air, the Lions hitting their straps early on and only sporadically having to withstand the few light blows which the Rebels threw at them. In the context of the tour, the additional feel-good factor within the group will be no harm in advance of Saturday’s pivotal test in the same city across the Yarra River at the Etihad Stadium.

Ryan Grant’s performance in the loose would not have been overly encouraging, but Ian Evans produced his best performance of the tour and whether it was significant or not, Sean O’Brien was the first back-rower hauled off.

Generally there was a consistently good shape to the Lions’ attack, with Conor Murray supplying crisp ball and Owen Farrell varied his running game nicely, with Manu Tuilagi looking sharp, fit and strong, and is clearly a contender for the bench.

There were, again, a few wobbles early on with the lineout, and after a couple of lost Richard Hibbard throws it required a clean steal at the breakdown by O’Brien, and a turnover penalty thanks to good work by Toby Faletau to undo the damage. A more reliable source for flexing their pecs has been the Lions’ scrum, and they pointedly stayed down at the first put-in inside their own 22 for the shove which earned a relieving penalty, though it would soon lose its potency.

The Rebels were putting in plenty of big hits, much to the home crowd’s delight, and Scott Fuglistaller made a good openside steal at the breakdown to end one siege but, in his first start for the Rebels since his recent and reputedly remunerative return to Australia, Luke Burgess sliced out on the full.

With the early blips now rectified, after a couple more penalties to the corner and ensuing lineouts, the ensuing pressure had to tell. Through the phases the Lions went, gradually wearing down the initially obdurate defence mostly through O’Brien, Faletau and Manu Tuilagi, the latter breaking through the tackle of prop Nic Henderson.

From the recycle Jason Woodward saved a try by Sean Maitland from Brad Barritt’s grubber, but given it came at the expense of a five metre scrum, it was, almost inevitably, only a temporary reprieve. Faletau was held up by Burgess after the Rebels buckled, with Glenn Jackson playing advantage, before Murray swivelled out of Fuglistaller’s tackle to score his second tour try. Farrell converted from the touchline.

O’Brien, who gave away two penalties a week before, conceded another when adjudged not to be the tackler and thus played the ball illegally, though Woodward missed a ‘gimme’ three-pointer. Instead, the Lions constructed a good try from halfway though a couple of phases off a line-out, good hands going around the hard-up defence for Tuilagi to make the initial incision off O’Brien’s clever inside pass with a hand-off, drawing another two before offloading left-handed inside for Maitland, who drew Woodward and passed inside to Faletau.

He ought to have scored, instead slipping when attempting to step Bryce Hegarty, but from the recycle Zebo drew two defenders as first receiver and put Maitland over, Farrell again converting.

Although Grant was again exposed in the defensive line when unable to fill a gap, the Lions preserved their 14-0 until halftime. Although they had a promising close-range lineout drive held up by Laurie Weeks almost single-handedly, before other chances went abegging. Maitland’s pass to O’Brien in the clear was forward and Farrell’s clever banana chip with the benefit of advantage just eluded Rob Kearney, who looked in good nick but had a relatively quiet night.

It couldn’t last, and eventually the Lions pierced the blue line ten minutes into the half with a clever shortside move off a line-out, Tom Youngs locating Ian Evans at the front, and Dan Lydiate peeling off the front from Richie Gray’s turn and pass to give O’Brien the try-scoring offload.

The bench was unloaded, with both Rory Best and Tom Court joining the fray, and the policy of eschewing shots at goal by continually opting for the corner was rewarded again when the Lions remorselessly trundled toward the line with Best holding the ball at the back. Whereupon Jordy Reid came in from the side to dislodge the ball from Best that Jackson not only awarded a penalty try but binned Reid as well.

There was one stunning take, counter and one-handed offload by Zebo, and not for the first or last time in the night, the chant of “Zee-bo”, “Zee-bo” amongst a good-humoured 28,658 capacity crowd went up in the night air. A fifth try followed off another attacking line-out on the 22, Best expertly finding Tom Croft at the tail, where Ben Youngs gathered the off the top ball on the run, sold Fuglistaller a dummy, handed off Nic Stirzaker and burst Woodward’s tackle to score by the posts.

Maitland and Zebo combined to deny Woodward a consolation try in the corner by driving him into touch. They were in the mood to keep the ‘nought’ part intact.

1 Owen Doyle: Creeping professionalism of schools rugby a threat to the game
2 Niall Quinn happy to step into the breach at FAI
3 GAA officials and referees brace themselves as new rules kick in, and this time it's for real
4 Scotland’s Finn Russell missed training after Sunday drinking session
5 Coco Gauff pulls off biggest shock yet by beating Naomi Osaka
Real news has value SUBSCRIBE