It was no accident that, despite being tested to our limits, we had the measure of England 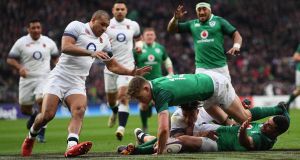 Garry Ringrose of Ireland touches down for the first try during the NatWest Six Nations match between England and Ireland at Twickenham on Saturday. Photograph: Shaun Botterill/Getty Images

Do I start with the game or do I start with the history? This was a phenomenal Test match befitting a phenomenal Test team tested in so many Grand Slam-winning ways. And yes, the score looked wrapped up in an opening half of the purest rugby. Pure in the sense that it gave us everything, but England were in Twickenham to test Ireland, so let’s begin with England and their selection. Clearly with a pack bolstered by the likes of James Haskell there was going to be little football but plenty of sparks in the corridor of power, where I was immediately confused by the irony of Eddie Jones’s flip-flopping. A dominant corridor requires a dominant 10, 12, 13 to maximise it.

Jones’s meaty pack was designed to dominate and create quick recycled ball (less than three seconds) to get their flying back three running. But it wasn’t until the 76th minute that Jacob Stockdale’s defence was tested with a one on one carry from Johnny May off a deep lineout. In fact, England enjoyed huge levels of dominance where, for instance, they opened in the second half with a monster display from Mako Vunipola, carrying flat-out onto the gainline with a recycled ball so quick the English had Ireland in trouble. But they were unable to get the ball to their key players as their midfield struggled to pass the ball accurately to each other. Ben Te’o struggled to know when to pass and when to carry, but the overall accuracy of their backline was really disappointing. With a vastly improved first-up ball-carry from England influencing a quicker recycle, the game needed George Ford’s ability to spot and execute opportunities.

The flip side was when Ford, having come on, looped off Owen Farrell. He squared his shoulders and carried the ball in both hands, forcing the Irish midfield to, for the briefest of moments, fix. This was all Mike Brown needed. As Ford hit him, Brown engaged Keith Earls and side-doored the ball to Elliot Daly for England’s second try. But this was scored on the 65th minute, and England were made to work extremely hard for every blade of grass they earned. But Jones’s rugby philosophy and vision is confusing, and his subsequent team selection further so. His pack gave his backs opportunity, but his backs were unable to exploit it, failing to attack where Ireland were temporarily weakest with speed and accuracy.

Likewise, the many minutes of attacking play leading to Elliot’s first try forced Ireland into lockdown defence. Defending lineout mauls is one of the most intellectually demanding activities in sport. I wonder how many hours the defensive line of scrimmage practice every week in American football. But that’s all those guys do. The Irish forwards do an awful lot more than defensive mauls but, when required, as it was on four occasions in that period, the Simon Easterby training sessions proved immensely important in stunting and blunting the English power play maul. Imagine, England couldn’t score a lineout maul in Twickenham.

Many label Ireland’s opening touchdown as a lucky bounce for Garry Ringrose. This is balderdash

In fact, the combination of defensive mauls and defence in general was crucial. Keith Earls’s tap tackle or Sean Cronin’s smash on Brown and myriads of fringe hits were obvious ones. Bundee Aki’s shoulder-hit on Daly was obvious, too, and very fortunate to receive only a penalty. It was a constant tussle either side of the ball where Ireland forced England into cul-de-sacs of their own making as England had the possession and the territory.

What do England do now? That’s for them to figure out, but they left tries behind that, like Scotland, would have tested Ireland in an even greater way.

The flip side of England’s struggle to spot opportunity can be seen in a million sub-plots in green. Many label Ireland’s opening touchdown as a lucky bounce for Garry Ringrose. This is balderdash. Look at the work done to get in the ball into Johnny Sexton’s hands 35 metres from England’s tryline. England had a flat defensive line pushing up on both sides, with Johnny May crucially up in the line, leaving Anthony Watson home alone. It was no accident that Sexton knew to land a bomb, especially when you look at Rob Kearney’s running line: out to in and in full confidence that, although Sexton had options around him, Kearney knew Watson was the target. Jones’s team selection was announced and this was spotted no doubt by video analyst Mervyn Murphy and planned and practised in advance. This was no accident.

It was also no accident that when Conor Murray arrived to yet another of the millions of Irish rucks this Championship, he was already thinking, surveying, summarising his options yards before he got his hands on the ball.

I was fascinated by so many defensive aspects, such as Richard Wigglesworth’s defensive play from scrumhalf. He appeared to be a lone ranger independently flying up from varied positions: hovering behind the breakdown or slightly wider out, he would fly up to target the ball receiver. However, this time, Murray spotted Wigglesworth defending the tram tracks alone and popped the sweetest of soft hands to Stockdale – and off he went for Ireland’s third try. Or that Ireland made only four passes for CJ Stander’s try with a tighthead at the centre of the creative play. This is no accident; none of it is an accident.