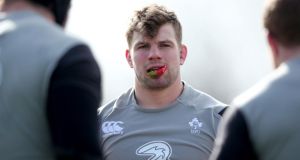 Ireland must be a three-dimensional team to defeat England, said Joe Schmidt, as he contested the assertion that his game plan is “boring, one dimensional, functional”.

Schmidt could have simply noted his team’s nine-match winning streak dating back to Twickenham last March.

“I didn’t read that,” said Schmidt.

“That’s a bit disconcerting. Is that what (is being said)?” he asked Newstalk FM. “We’ll let other people make those assertions that the game plan is whatever it is.

“If you look across the stats the teams are very similar in the amount of kicking they have done,” he added.

“One of the things I will say in modern rugby there are a lot of big men on a pitch that isn’t that big. It may look quite big depending on how far up in the stand you are. There is not a heck of a lot of room out there

“I believe you got to be three-dimensional in your attack. If you are one dimensional against England with the line speed they generate and the power they have in the contact area it is going to be a tough day.

“We are under no illusions it is going to be a tough day anyway.”

Schmidt did add: “We might get a stalemate because both teams are so well prepared.”

Heaslip remained in camp this week despite fracturing three vertebrae when kneed in the back by the subsequently suspended French lock Pascal Pape. The Irish medical team are targeting his return against Wales on March 14th.

“Iain Henderson got a bit of a knock on his knee and didn’t train Tuesday so we felt it was best to go with Jordi who played there against Argentina in the summer and against Italy when we felt he played really well,” Schmidt explained.

“He’s very quiet, Jordi, gets on with the job, he gets on with other people. He is a workaholic around the pitch, gets through a lot of work both sides of the ball, be it carrying or cleaning out or making tackles.”

Schmidt added that Peter O’Mahony and Seán O’Brien will help “map” Murphy around the pitch so he doesn’t over work.

Cian Healy remains on the bench despite a physical showing for Leinster last weekend while Eoin Reddan and Tommy O’Donnell have been promoted to the matchday squad.

Isaac Boss makes way for Reddan, who plays a leadership role within the group.

“I think Jack McGrath has done a super job,” said Schmidt of Healy’s understudy retaining the number one jersey. “He was the stand-out player for us against South Africa last November. We, the coaching staff, have got genuine faith in him. Cian is still a bit short of game time.”

There was no room at all for Luke Fitzgerald, again, despite his sparkling display against Zebre at the RDS, with Munster vice captain Felix Jones continuing as outside back cover.

“And Dave Kearney, all three of those guys are really pressing for inclusion. Dave was one of our stand-out players during the championship last year. Keith Earls is training incredibly sharply but hasn’t had much game time but is putting pressure on. Luke has done really well as well.”

The concern was to have three left footers in the back three, along with Rob Kearney and Simon Zebo, should Tommy Bowe be replaced.

Meanwhile, the IRFU have urged fans not to buy tickets from unofficial sources for Sunday’s sold-out game after they were contacted by a number of people that lost money when they attempted to buy tickets advertised on what the IRFU described in a statement as “well-known websites”.

The statement pointed out that “in one instance a supporter was scammed twice in two separate transactions on two different websites”.