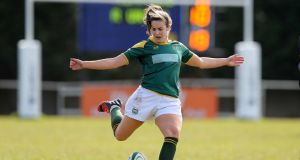 Railway Union’s Kim Flood will make her debut for Ireland at fullback against Italy at Donnybrook on Sunday. Photograph: Ryan Byrne/Inpho

Ireland coach Tom Tierney has included two new caps in his back three for Sunday’s Six Nations clash with Italy at Donnybrook (1pm). In total there are eight changes and a number of positional switches from the defeat to England at Twickenham.

Railway Union’s Kim Flood, who is part of the Sevens squad, comes in at fullback for her first international start, with skipper Niamh Briggs moving to midfield to partner Sene Naoupu.

The other new cap comes on the right wing, where UL Bohemians’ Liz Burke takes over from Elise O’Byrne White.

Alison Miller makes her return to the side in place of Mairead Coyne on the left wing after the Ireland Women’s Sevens trip to Sydney and Sao Paulo last month.

There are new halfbacks in Railway Union’s Nikki Caughey, another member of the Sevens Programme, coming back into the side at outhalf and will be partnered by Galwegians scrumhalf Mary Healy, who will be making her first Six Nations start.

There are three changes and a number of positional changes in the pack, with Lindsay Peat making a first Six Nations start at loosehead, replacing Ruth O’Reilly, while Elaine Anthony of Highfield joins Marie-Louise Reilly in the secondrow.

Sophie Spence moves back to number eight, while Ciara Griffin switches from blindside to openside. Ciara Cooney comes in to take the number six shirt.

Ireland could include a third debutant on Sunday with Queen’s University back Claire McLaughlin hoping to earn her first cap after being an unused sub in the defeat to England at Twickenham.

Speaking ahead of the game, Tierney said: “While results haven’t gone our way since the opening game against Wales, we have been strong in passages of our play, but mistakes proved to be costly and because of that we just didn’t manage to come out on the right side of the results against France and England.

“We’ve made a number of changes this week and this is to allow players the opportunity to show us what they can do, and no better place to do it than at home in Donnybrook. There’s a couple of new caps and girls making their first Six Nations starts so it should make for an exciting game on Sunday against Italy”